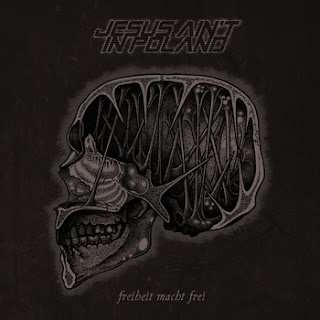 Jesus Ain't in Poland
Freiheit Macht Frei
Grindpromotion
Jesus Ain't in Poland sound like they could have been cloned from an Afgrund tissue sample. That's a simpler way of saying these Italians sound like a photostat of a mimeograph of a Xerox of Nasum. The Italian band have chosen to play in a pretty crowded sandbox and they have a hard time jostling for facetime against more aggressive peers like The Arson Project, Relevant Few and Sayyadina. Even that name plops Jesus Ain't in Poland in between Jesus of Nazareth and Jesus Crost. They just can't seem to differentiate themselves no matter how you look at it.
Musically, Freiheit Macht Frei is a whirlwind of high register keening and blastbeats, but there's no hook that consistently rips at your flesh, making their presence permanent. In fact, Jesus Ain't in Poland are at their best when they back off the blastbeats and led things get low and slow. The stumbling tempo of "The Kingdom" gives the wonderfully grisly bass the space to reverberate, letting the phone cable-thick strings rumble underneath the noise. But Jesus Ain't in Poland can even take that impulse too far. The very next song, "Scarlet Tongues" pushes the downbeat shtick into fumbling, pointless repetition.
Jesus Ain't in Poland have the speed; they just don't have the riffs yet. They're pulling from the right influences, but they need to spend a little bit longer studying what made their favorite songs so great in the first place. Once they pin that down, then they'll be ready to macht grind.

[Full disclosure: Grindpromotion sent me a download.]
Posted by Andrew Childers at 8:09 PM

According to your reviews, any band which tries to deliver quality grindcore with a "better" sound is copying Nasum! You're getting repetive and boring...

If "quality grindcore" and a "better" sound means breakdowns, chunky guitars and repetitive structures, whether or not they actually sound like Nasum seems to be a moot point. I'm tired of people defending this sort of fat, flabby, compressed mediocrity. Are you with Grindpromotion, in the band or just a disgruntled fan with nothing better to do?

No, i'm not from the label or the band and i'm not even fan.. i just can't see how this band is similar to either Nasum or Afgrund... to me it recalls more of german or french bands, or american perhaps, then any of the swedish ones here mentioned.
In many reviews i've noticed this "Nasum and Sweden are the best, whoeverelse is imitating and failing" attitude, while there's a wider range of facets and bands in grindcore.

i do loves me some swedish grind. i make no secret of that. and nasum is definitely a strong frame of reference for me but to each their own.

I want to note that I'm not dissing Nasum, but what I heard when sampling this band's output. It seemed to me that the commenter was defending the band more than he or she apparently was.