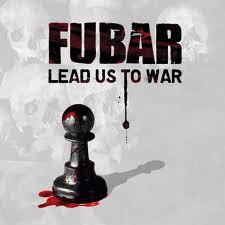 F.U.B.A.R.
Lead Us to War
Hammerheart
The sagacious assortment of anonymous eminences we collectively refer to as "they" assure us that absence makes the heart grow fonder.  Accepting that, ad arguendo, as a truism, my ventricles must be near to bursting with joy (or Five Guys bacon cheese dogs) because it's been seven years since F.U.B.A.R. graced us with Justification of Criminal Behaviour. Sure, they've popped a squat and dropped a bucket full of splits in the long years since, but there's something special about getting a full 30 minute experience from the Dutch power violence-inflected grindcore gang.
F.U.B.A.R. albums always sound wonderfully huge, and Lead us to War is another apatosaurus-sized stomp through 21st century sickness and malaise, courtesy of Dr. Doom bassist J.B. Van der Wal's production job. It also showcases a band in consummate control of their art. While they're not shattering any molds (though "Misplaced Faith" sneaks in some apocalyptic pschedelia and hip hop delivery), F.U.B.A.R. know how to play with time and tempo to generate the largest impact and they're not shy about swiping tidbits from every branch of the speedy punk family tree to make their point.
And they'd really appreciate if you pay attention to that point. Fourth track "I Scream Protest" is the best key to unlocking F.U.B.A.R.'s Cerberus-headed vocal assault on the eroding foundations of civilization. Faced with the iniquity and inequality of a globalized world, the song is a rallying cry to cast down the demons of avarice, violence and intolerance. Those themes may be familiar to the point of tired cliche, but F.U.B.A.R. manage to convey a sincerity that earns them a pass even from my cynical, shrunken Grinch heart.
In another wonderful touch, Lead Us to War feels like it was sequenced for vinyl, with the title track in the middle providing a satisfying emotional closer to what would be Side A before taking a deep breath, flipping the platter and diving back into the grind. F.U.B.A.R. won't lead you to war, but give them a chance and they'll lead you somewhere awesome.
Posted by Andrew Childers at 7:41 PM

Wow stunning review. I have only bandcamped this release on occassion, but its certainly one to remember the vocals especially. This and the split with Lycanthropy are on my to get pile from this band.

This is fucking incredible! I've never really paid much attention to these guys before.

Love the varied vocal attack and diverse tempos. There's a sort of tragically heroic melodic undertone to a lot of the riffing, too, which I really dig. Maybe I'm imagining that part, but I swear it's there.

Lifting tunes to the max.

You know, I really tried very hard to dig that last Catheter album, but it just leaves me sorta "Meh."

I love the first two, but the switch to that Swedish chainsaw guitar sound just didn't sit well with me, for some reason. It's like it just washed everything out. It doesn't suck, fo sho, but I just liked them better when the guitar was sharper and had bite, more of that dry Bay Area thrash tone.