I know this one is going to be a stretch from the outset: defending one of grind's most reviled acts of the last decade. But I fucking love The Locust. The bug be-masked California spazzcore space aliens sounded like David Cronenberg directing a remake of Tetsuo the Ironman from a script by William Gibson that was edited in Edgar Wright's trademark staccato chop style.
What I find fascinating is that for as much shit as The Locust took, most of their tools were commonplace: marrying Agoraphobic Nosebleed’s penchant for deliberate provocation and awkward confrontation with Gasp’s chemical-colored, free-form psych-violence turbulence. Yes, they often get tagged as harbingers of the dreaded "white belt grin," but The Locust, clad in their sublimely absurd bug suits, had so much more going on than the multitude of spazzy also-rans ever conceived of.
My library of The Locust albums has a couple small holes, but here's an album by album discussion of why the band is worthy of your respect.

Have you ever heard of insect politics? Neither have I. Insects... don't have politics. They're very... brutal. No compassion, no compromise. We can't trust the insect. 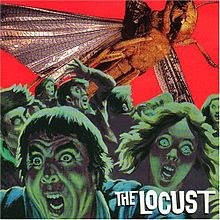 The Locust
GSL
1999
The Locust's sui generis insanity emerged fully formed with seemingly no awkward larval stage with not one but two eponymous releases because apparently thinking up album titles was really fucking hard in the early years. That or they're trolling. (Or a little from column A, a little from column B.) Crashing waves of keyboards and assorted noise shoved their plastic-wrapped and thoroughly be-chromed spazz freakouts into (ever more) lysergic post-cyberpunk orgies of synaesthetic overload. The Locust screeched along like what the neon-screaming, corporate-logoed, constantly surveilled future we’ve now come to inhabit inevitably had to sound like. But The Locust weren’t just shallow parodists or stream of (very warped) consciousness poets. There are nuggets of trenchant social insights and even occasional outright political diatribes (“Kill Roger Hedgecock”) that just happen to be masquerading as throwaway, kaiju-core nonsense. 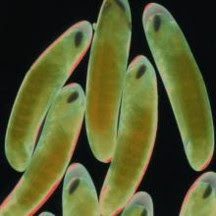 Flight of the Wounded Locust
GSL
2001
Follow up Flight of the Wounded Locust found The Locust really hitting their six-legged stride, blending together electronics that sound like a swarming mound of digital fire ant hackers armed with Ono-Sendai decks with rubbery-rhythmed power violence that careens from wonton blast abandon to overcrowded hive paranoia ward explosions of directionless rage. Or, in the case of “Get Off the Cross, the Wood is Needed,” all of that at once. This is the first time The Locust really came out in all of their buggy glory, all of the constituent parts were really starting to form a coherent whole, a glistening carapace of power violence, no wave, post modern metal and agitating punk insurgency .

We'll be the ultimate family. A family of three joined together in one body. More human than I am alone. 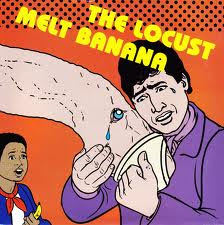 Melt-Banana split
GSL
2002
This split gets to the very heart of why I marvel at the hate slung The Locust's way. Paired with critical darlings Melt-Banana, The Locust don't seem so far out of place. For The Locust, the split was a chance to take a dry run through a handful of songs that would form the core of their pinnacle work Plague Soundscapes. It's the same twitchy, glitchy, bug-zappered grind violence but maybe a little rougher around the edges than you're used to. Some of the songs were still in the refining phase, finding that precarious balance between punk adrenaline and tightly controlled freakouts. But it's when you bounce them off of professional schizophrenics Melt-Banana that The Locust began to make some musical and historical sense. Their freakazoid noise is just funhouse mirror of Japan's craziest punks pushed to its most carnival extreme.

The disease has just revealed its purpose. We don't have to worry about contagion anymore... I know what the disease wants. 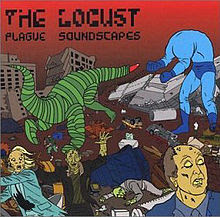 Plague Soundscapes
Epitaph/Anti
2003
Everything The Locust had packed into their pipe bomb aesthetic detonated on 2003’s Plague Soundscapes, a concussive collection of twitching shrapnel that sends searing shrapnel exploding out into dummies shaped like American warmongers, deluded religious dupes and assorted other simpletons and pointless carbon-sinks. A more-rounded bass tone brought more menace to The Locust’s sound, playing off shrill guitar screeds, yowled vocals and the ubiquitous noise passages, which had evolved from atmospheric icing to another pointed stick in their arsenal of discomfort. The wavering “Live From the Russian Compound” shows off The Locust at the peak of their powers. The musical DNA is still recognizably power violence in the same way that prehistoric fish and a great white share a common history. But one is a much more refined beast, an apex predator that took the best of the old, tossed in a few new tricks and started gorging its way to the top of the aquatic food chart. Few descendants of the original power violence progenitors took that inspiration into the Escher-angled dimensions favored by The Locust and certainly none of their so-called “white belt” contemporaries ever had this same bravado and vision.

Most people would give anything to be turned into something else. 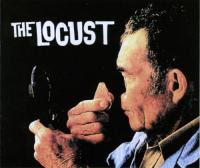 Follow the Flock, Step in Shit
Three One G
2004
[Disregard my chronology here. This was actually an early effort that was re-released in 2004. All of my other points still stand, however. Thanks to Survivalist for the catch.]
The most obvious gateway between traditional grind and power violence and the demented world of The Locust would probably be this three song EP, which features two originals and an Infest cover. If I played this for you without telling you who it was, you would probably guess it was any number of modern power violence bands, at least until the weird noises of the title track kick in. Follow the Flock, Step in Shit found The Locust at their most restrained and traditionally aggressive, gracing us with the closest thing they ever came to a traditional power violence album. The three songs are all rough and tumble, particularly the domineering bass of “Red.” I love this EP because the most trolling thing this merry band of musical pranksters could do at the time was turn out a release on a 3-inch square-shaped CD that wouldn’t sound out of place in their most vocal detractors’ record collections. Well played.

The flesh. It should make the computer, uh, crazy. Like those old ladies pinching babies. But it doesn't; not yet because I haven't taught the computer to be made crazy by the…flesh. 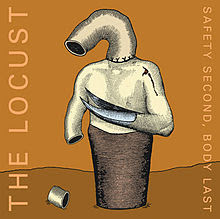 Safety Second, Body Last
Ipecac
2005
Being the trolling trolls they are, The Locust followed up their pinnacle with a two-track album that apparently includes several different songs (but never really tells which ones are which). Safety Second, Body Last saw The Locust step back from the needle sharp knives of Plague Soundscapes to warp their way through several longer more convulsive, flailing noise paintings that shy away from even their tenuous grasp on traditional song structure.  The end of the first track is a spiky, cactus-shaped prickle of sound that jabs and stabs and is content to go no further. Safety Second, Body Last was the gloriously awkward transitional record (I’m a sucker for those) that quite literally mutates from their earliest spazz-core freakouts to something more elastic and abstract in the space of 10 deliciously abstract minutes.

Yeah, I build bodies. I take them apart, and put them back together again. 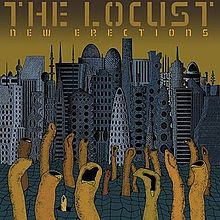 New Erections
Anti
2007
I see a lot of parallels between The Locust and Agoraphobic Nosebleed. Both use shock and confrontation to pry open your mind long enough to make you think. Neither is afraid of stepping outside of narrow genre confines to add instruments and sounds that were previously verboten. And both were masters of hit and run sprees of microburst venom. Until they weren’t. Two years before ANb gave the world a digital crossover record with Agorapocalypse, The Locust had made a similar leap to longer, more involved songs that nodded back to their roots while stretching their wonted sound into new directions on final record New Erections. With runtimes as long as three and four minutes, New Erections gave The Locust the legroom to play around with their idea and see  where they would go rather than firing off a gatling of riffs. While it’s not as immediate as their earlier work, it’s still recognizably The Locust, just slower, more involved. They’re prophets of a creepy crawly apocalypse like those pseudo sandworms on the album cover, slowly undermining grindcore, civilization, whatever. Like they said, they’ll bury this city in trash.

Help me. Help me be human.
Posted by Andrew Childers at 9:33 AM

I'm not particularly interested in having a discussion on the merits/ lack of merits on The Locust in 2013, but your timeline is incorrect. The Follow the Flock release is material from 1996, and probably the reason why it's more obviously in line from the scene they originally came from.

It's hard to really do this kind of overview now - that follows what threads of old they kept/ discarded and what new influences they picked up - as they mutated.
They belonged to several very specific epochs - frequently being in opposition to them, as opposed to being in comradeship with them - and those epochs are hard to translate in the fully gloabalized era where it's not strange to be into Poison Idea, Slayer, and Joy Division (for example).

i thought follow the flock was from earlier. wikipedia lies to me again! it must have been reissued at some point. thanks for reassuring me i'm not crazy.

"They belonged to several very specific epochs - frequently being in opposition to them, as opposed to being in comradeship with them - and those epochs are hard to translate in the fully gloabalized era where it's not strange to be into Poison Idea, Slayer, and Joy Division (for example)."

That makes perfect sense. I remember when I first got into the locust (plague soundscapes era), it was completely unacceptable that I was into the metal I was. Their was a huge cultural lag in rural new england where it wasn't really ok to be into metal around punks (and visa versa... and certainly not new wave around either) until 2007, right around when the locust broke up. To walk that line was definitely a provocation, and to the fact that they are still so disliked/considered false is proof of that carrying over.

I appreciate this post though, because its hard to keep perspective on the evolution of a band when it so closely follows the evolution of yourself (ie, I was a teenager when I listened to them). I kind of want to re-examine that.

Also, I have this sick nostalgia of when being a hipster was such a weird new thing that the locust were relevant and interesting.

i'd wondered if there was any locust overlap in your music, ryan. it doesn't really surprise me to hear that.