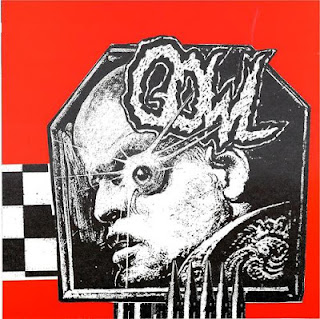 Gowl
BuzzBox
Self Released
Gowl is either derogatory Irish slang for the vajayjay or a disused synonym for a long, harrowing howl. I think this Connecticut trio is open to either interpretation as they dash off a solid seven inches of songs that should set a-thumpin' the hearts of Backslider aficionados. Trafficking in bondage and dominance imagery ( and a song all about Mick Harris!), Gowl turn the rhetorical tables on every sadistic bully, asshole boss, rule-bound cop, and fickle girlfriend that ever fucked the band over with tight-wound grindcore tales intended to raise welts.
Gowl grind through wave after glorious wave of feedback, searing and spitting and snarling through a wall of wondrous noise. Underneath all that keening, drummer Kyle Clements powers through the songs by alternating snare rolls with his blasts, adding a different texture to Gowl's otherwise traditional breed of grind. Everything is noisy and scabbed, open wounds and loose sutures. Second song, "Escalate This...," lives up to its name by pushing Gowl's grind to a dervish pace. The trio even play rope-a-dope with the mid-side slow down of "Can't Scream With Your Mouth Full," a vertiginous freefall moment in between  whipsaw grind. And all of that's just side fucking A. Flip the wax and do it all over again.
The whole EP sounds likes the screeching car brakes before an inevitably fatal wreck. This isn't the band you look to if variety or innovation are your thing. Instead, Gowl deliver just what they promise on the package: music for "grinders, freaks and weirdos."

[Full disclosure: the band sent me a review copy.]
Posted by Andrew Childers at 2:16 PM