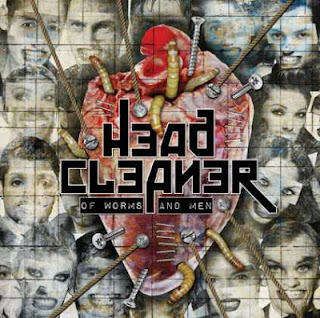 Head Cleaner
Of Worms and Men
United Guttural
Thanks to the cratering Greek economy, grinders Head Cleaner must have been bedding down in a filthy squat in the years since last offering Resistance, Determination, and the Sheer Will to Overcome. Latest effort Of Worms and Men pretty much reeks of communal bottles of cheap wine and dreadlocked hair. The crust-to-grind ratio on Of Worms and Men plants Head Cleaner pretty squarely in Resistant Culture territory with occasional aspirational flashes of Rotten Sound during their stronger moments.
While the new found punk soul gives Head Cleaner some new found urgency for their didactic breed of agitprop (songs like “It’s Now Safe to Turn Off Your Mind” and “War is a Product of Imperialism”), Of Worms and Men is held back by an over-reliance on repetition and a lack of distinction between one crusty-grindy shoutalong song and the next. Eight of these 14 songs stretch well past the two minute mark and could have stood some pruning. For example, long stretches of second banger “One More Nail in the Coffin of Peace” largely consist of repeating “I have a war inside my head” over and over. The song loses some punch through sheer repetition and that early in an album it becomes worrisome.  The insistence on repetition also mars Head Cleaner’s attempts to step out of their grind box. “Nothing to Worry About” stumbles along on a fractured riff that could have been lifted from cyber-metallers Obliveon’s back catalog but endlessly shouting “no worry” hampers the song’s impact.
I thought Resistance, Determination, and the Sheer Will to Overcome showed promise until the atrocious final song went off the ambient rails and once again some judicious editing could elevate Of Worms and Men from a decent album to something much stronger.

[Full disclosure: the band sent me a download.]
Posted by Andrew Childers at 9:48 AM