G&P Review: Nothing More to Eat 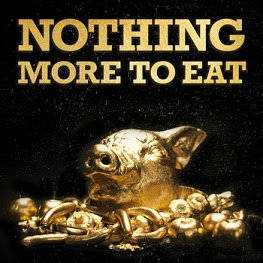 Nothing More to Eat
Nothing More to Eat
Bandcamp
Having not fully gorged themselves on the grind with Eat'n, Finnish gourmands Nothing More to Eat heap high their cafeteria tray with another heaping helping on their thrashtastic self-titled full length. For good measure, opener "Comfort Zone" melts an extra layer of Velveta goofery over the top for a gooey extra layer of the weird, kicking things off with crashing mariachi horns. Because why the fuck not?
While Nothing More to Eat still give a respectable showing in grindcore's eternal footrace, the soul of this album is bonded (by blood?) to  thrash. That was always lurking in the band's speedy picking style, but this shot Nothing More to Eat give their thrash impulse free rein to romp around and take a few headers off the stack of Marshalls. Loosening up gives songs about zombies, death in space and infernal seamen a swing that traditional grind just doesn't have. While the thrash is prominent, Nothing More to Eat aren't just raining blood. They've still got grind in their back pocket and they're not afraid to drop the Scandinavian-style crust on "Skate N' Die" or even whip out a skronk jazz sax solo on "There's No Glory in Space."
While every pimply teen who ever purchased a denim vest and some puffy white high tops at the local vintage store seems to have started a thrash band the past few years, Nothing More to Eat succeed in that realm because I don't think they set out to make a thrash record. Nothing about the album feels artificial or premeditated even if it won't be displacing Beneath the Remains on the best of thrash list just yet. It's just something that seems to flow out of their playing without a second thought. That's what makes it work.

[Full disclosure: the band sent me a download.]
Posted by Andrew Childers at 6:21 PM