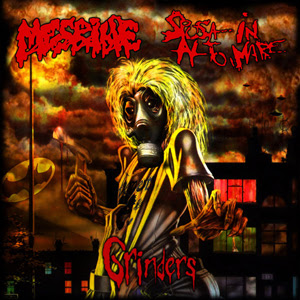 Mesrine/Sposa in Alto Mare
Grinders
Grindfather Productions
This Grinders split couldn’t be more stark in contrasting opposites. In the first corner we have Canadian spree killer enthusiasts Mesrine, whose high protein diet of classic grind tropes gets repacked into seven songs of aggression and nothing but aggression. Then there’s the chaotic three ring circus being offered by Italians Sposa in Alto Mare, who Cirque du Soleil their way through every convolution of spastic grind, weird noise and cheeky mockery they can find without a hint of filtering or editing.
Like an ADHD toddler on a Pixie Stix binge, Sposa in Alto Mare pack the split’s second half with a lumpy amalgam of surf rock country shtick on “Una Corsa di un Cow-Boy” and King Diamond-esque wails ofn“Black Metal Latin Lover” and “Inno Dell’ Heavy Metal & Dell’ Hard Rock” and every musical oddity in between.  The only time they catch their breath and come back to earth is to rip through a cover of Agathocles’ “Kurose.”  It’s a Willy Wonka world where everything is painted in bright but contrasting colors with ideas being flung out at dizzying speed but with very little connective tissue, making Sposa in Alto Mare’s side a hallucinogenic endurance test. Whether it’s good, bad or indifferent as a listening experience will be a Rorschach test of your musical preferences.
Mesrine’s 90 second shards of shrapnel grind, with nods to modern greats like Insect Warfare and Nasum, comes off looking so much more potent by comparison simply by virtue of being directed. There’s a great snap to the snare drum that makes their side of the split pop as they gnaw through songs about apocalypse kook Harold Camping, the Grim Sleeper murders and the violent underbelly of so-called civilization. There’s nothing flashy to the way they stomp the accelerator and never let up for their whole side, but by contrast it’s a welcome break to the over-caffeinated exuberance of Sposa in Alto Mare.