The book: The Room by Hubert Selby 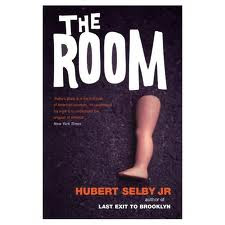 A petty criminal, The Room’s only character, sits in a jail cell awaiting his trial. Isolated physically and emotionally, the unnamed narrator spins elaborate fantasies of increasingly violent and depraved revenge for purely imagined slights. He builds himself up as the pure avenger of wholly imagined wrongs, a fantasy paragon at odds with his anonymous, routine criminality. The criminal lashes out against the imaginary strictures that have landed him in jail in a chilling portrait of incoherent violence and the cost of fraying social ties. Like The Catcher in the Rye, The Room is thin on plot, but Selby penned a stunning character study, probing the fragile psyche of a born loser whose egomaniacal rage and incoherence are just as much of a prison as the bars that keep him locked up.

A representative passage:
Just twist it around and shove it up their asses, treading the floor of his cell, nodding his head with strong approval, shove it up and break it off. Those ugly mothers cunts. I dont need no fucking lawyer to make those cocksuckers look like idiots. When I get through I/ll fixem good. I/ll showem. The dumb sonsabitches. Krist, what a bunch of ignorant slobs Filthy, fucking slobs and they can shove people around just because they have a badge. Ignorant fucking okies who dont know their asses from a fucking hole in the ground and they get away with murder because they have that fucking uniform and a crew cut, the flattop bastards. The fucking flattop bastards. Drive around like theyre king shit. Drink coffee and eat donuts like they own the fucking joint. Looking down their noses at people. Who in the fuck do they think they are. Nothin but a bunch of ignorant slobs and they look down their noses at people. Jesus, what a pair of balls they have. What a fucking pair of balls, pounding across the floor, waving his hands, take away their guns and they aint shit. They aint worth a fiddlers fuck. I dont know who in the fuck they think they are, but I/ll be goddamned if theyre going to get away with it. I/ll showem. I/ll be a rotten sonofabitch if I dont showem.

The album: Prowler in the Yard by Pig Destroyer 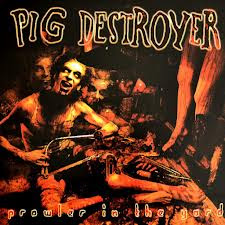 J.R. Hayes’ head is a Selby-esque place, full of lurking horrors, crippling emotional vacancy and self-inflicted nightmares. Prowler in the Yard’s stalkerriffic story line could easily have been culled from Selby’s work. Transpose it into Selby’s idiosyncratic grammar and you could practically slide it into any number of the Brooklyn author’s works. Selby and Hayes both weave tales of impotent figures who can only take their rage out on imaginary targets, too passive and cowed to act out in life. They’re characters that have regressed into an inner fantasy land because real life has left them beaten and ignored. Both take you deep into the mind of a person you definitely don’t want to be, but, if you’re honest, can probably relate to more than is necessarily comfortable.

My knuckles are bleeding on your front door and these flowers are wilting in the rain. They were for you and now they are for no one. They are irrelevant as mercenaries in times of peace. They are smoke twisting off the lips of a movie star. Here is a boy with paper skin who longs to touch the girl of broken glass. She loves it when he wears his skin like that. In tatters.
Posted by Andrew Childers at 6:28 PM

Its nice to have books posted on here I haven't read yet. I could use new things to read.

No musical piece has influenced my concept of writing (whether it be prose or poetry) more than this album .


Hayes has (had) an ability to tread that line between grotesque and beautiful and make it fully fleshed in his characters/vignettes. Sev7n, Irreversible, or Old Boy seem like fitting spiritual partners for Prowler.