Good Reads: The Devils You Know

The book: Devils (aka The Possessed) by Fyodor Dostoevsky 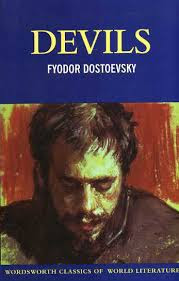 I continually flip flop between Devils and The Brothers Karamazov as my favorite book of all time. I usually read both about once every six months just on general principle. Devils, one of Dostoevsky’s lesser known novels, is the tale of would be communist revolutionaries fomenting chaos in a rural Russian enclave. It’s a set up that allows Fyodor Mikhailovich to dwell on the corrupt soul of man through the characters of the venal, manipulative Peter Stepanovich, the decadent Nikolai Stavrogin and the melancholy suicide Kirillov. It’s a story of vice, murder, suicide and social decay as Dostoevsky chronicles a society that rots from the inside out but still begs for something noble and righteous to cling to. If they cannot differentiate between the sublime and the foul, that's only one more cause for weeping. While Dostoevsky’s prescription, embracing a reactionary form of Orthodox Christianity, may not resonate with too many grindheads, his sorrow at the sheer waste of it all is palpable.

“Life is pain, life is fear, and man is unhappy. Everything is now pain and fear. Man loves life now because he loves fear and pain. That’s how it’s been. Life is given in return for pain and fear now, and that’s the whole deception. But man is still not really man. There will come a new man, happy and proud. He who doesn’t care whether he lives or dies – he’ll be the new man. He who conquers pain and fear – will become God. And then the old God will no longer exist. […] God is the pain of the fear of death. He who conquers pain and fear – will become God. Then a new life will dawn; there’ll be a new man; everything will be new… History will be divided into two parts: from gorilla to the destruction of God and from the destruction of God to… […] … to the physical transformation of the earth and man. […] Everyone who wants absolute freedom will have to dare to kill himself. Everyone who dares to kill himself will have discovered the secret of deception. There’s no freedom beyond that; that’s everything – there’s nothing more. He who dares kill himself is God.”

The album: Moksha by Cloud Rat 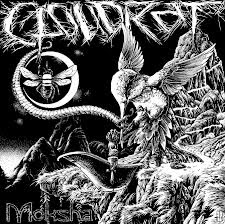 There’s a similar sorrow that undergirds Cloud Rat’s most recent album. It’s the soul sickness of the survivor who watches friends and family succumb to the kind of inner pain that drives them to reckless extremes (chemical, emotional, physical) to blunt the torment of their existence. But underneath it all, there’s a brooding sense of hope at war with the despair that plagues humanity. Short of death, lives can be changed and mistakes can be atoned, sins can be cleansed, peace can be found.

Should have let me choose, shouldn’t have you? Rebellion leading to freedom. Burned alive. I smell you. I smell like you. I am awake and inside out. “Awful punishment awaits bad people…” Jenny taught me. And it will be heroic to try and stop me. It’s still happening and it’s not changing. So you’re lying lying lying. My voice is in your throat. And it all must burn burn burn.
Posted by Andrew Childers at 6:52 PM