The book: Piercing by Ryu Murakami

New father Kawashima Masayuki is obsessed with the fear that one day he will stab his infant daughter in her sleep. He stands over her crib many a night contemplating the way the icepick would slice into that tender baby flesh, savoring the horror of it all, questioning whether he could actually commit such a heinous act. He doesn’t really believe he would ever harm his child, but once he gets the idea, it takes over, consuming him. The only way to clear his obsession, he decides, is to murder a prostitute, stabbing her to death to expel his demons. Unfortunately for Kawashima, he picks the wrong hooker. Escort Chiaki is just as tortured and violent as he is. What follows is a meditation on violence, compulsion and how your shitty past inevitably fucks up your future and how we prefer to inflict our shit on others rather than face up to our problems.

A representative passage:
Inspired by a magazine article he’d read and photocopied in the library, Kawashima had decided to buy a knife as well as an ice pick. The article was about a thirty-two-year-old ‘soap tart’ who’d been found murdered in a hotel room, with her Achilles tendons severed. An anonymous police detective had volunteered this explanation: “When you cut the Achilles tendon, the sound it makes is as loud and sharp as a gunshot. The killer must have known that and taken pleasure in it.” Kawashima decided that before stabbing the victim’s stomach with an ice pick—or afterwards, if need be—he’d slice her Achilles tendons. He was curious what it would sound like exactly. And he wanted to see the expression on the woman’s face when it happened.

The album: Red on Chrome by Crowpath 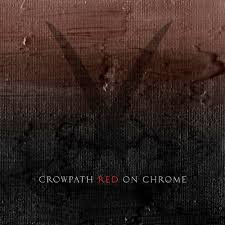 There’s a clinical dispassion to Crowpath’s murder metal. They’re a band that understands “The Precise Art of Knives.” But for all its musical ferocity, Red on Chrome feels like one of those true crime reality shows set to music, a cold eyed, objective recitation of the details of the crime. This is far more cold and calculated than the hot blooded second degree murder of something like Rotten Sound's primal Murderworks. Instead, Crowpath mirror the way Kawashima methodically goes about plotting his murder, even writing out his plans extensively in a notebook. It’s not slasher film monsters that are terrifying. It’s that quiet guy next door who just snaps.

A representative song:  “The Precise Art of Knives”


I love how it all came through. It’s amazing how it aims on the target. A dream now in practice, so touching. Hail for the new. This bizarre violent creation speaks volumes. It’s precise and dominating. It clears a path through the everyday madness. An examples has been set, a map to follow. It’s infinite, hard and cold, absolutely brilliant. The new surgery.
Posted by Andrew Childers at 6:44 PM

Labels: crowpath, good reads, grindcore, how swede it is, red on chrome

This was a cool post. It made me go order the book! I didn't know this was the same person who wrote Audition, totally cool. - Steve

yeah i probably should have mentioned that because that's what most people will know him for. however, he also directed his own movie called tokyo decadence which is about as depressing a flick as you'd expect from him.