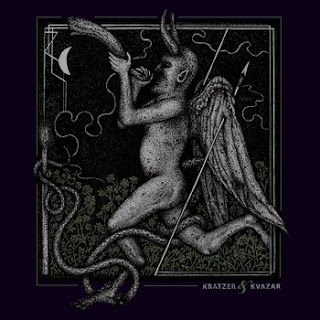 Kratzer/Kvazar
Split
7 Degrees/Blastbeat Mailmurder
There’s a gray-scale anti-rainbow that haunts the periphery of the visible spectrum and Kratzer and Kvazar divide its hues between them on their fog-colored split effort. The effect is like a reverse Wizard of Oz where all of the color and joy are leached out of a broken and disappointing world.
German crusties Kratzer dwell at the center of a bizarre Goode homolosine projection of the punk rock world in which the sneaky melodicism of Scandinavian d-beat somehow abuts raging Japanese hardcore. Kratzer chip their seven crusted cries from the cracking cement of abandoned playgrounds, ruptured highways and crumbling brutalist highrises, choked in the ash of industrial smog and sickened by the pestilential runoff of industrial waste. It’s the gray grime of our own claustrophobic modernity as its plaster veneer chips away, exposing the flimsy foundation beneath. The moody, mercurial “?/!” glooms its way through the broken landscape, the pivot point of Kratzer’s contribution, a murky slow motion encapsulation of their dimmed horizons and pervasive hopelessness.
After Kratzer managed to paint so evocative a portrait using only monochromatic tools, it’s kind of a bummer that Kvazar’s side is also bogged down in gray. Only this time it is the uniform mush of a bowl of oatmeal.  Apparently the band has been lurking in the Greek grind scene since time immemorial and these, their final songs, were trapped in cryostasis until they recruited Dephosphorus’ Panos Agoros to come in add the missing vocals. Unfortunately, the murky, mushy production that squashes everything together doesn’t play to the astro-grinder’s strengths, burying his distinctive yelp behind flat sounding drums and guitars. The endless gray horizons of one anonymous song after another only makes things worse as Kvazar just slog their way along colorlessly. Where Kratzer’s grays are an accurate snapshot of a black and white world, Kvazar’s contribution is a despondent drone through a missed opportunity. After the intriguing opening half, it’s a shame the second side of this promising split doesn’t live up to its amazing gray art.