The book: Arkham Aslyum: A Serious House on Serious Earth by Grant Morrison and Dave McKean 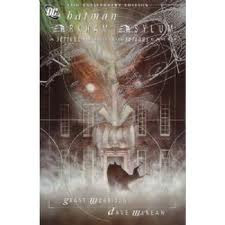 I currently have subscriptions to three separate Batman titles. My home library has a dedicated Batman shelf. I have a different Batman shirt for just about every day of the week (not including my hoodie, pajamas and ubiquitous hat). My only contribution to decorating Lil Grinder’s room was installing a Bat Signal night light. I’ve been known to blow whole weekends watching Batman movies, starting with Adam West and working my way up to Christian Bale, only stirring from the couch as my bladder and stomach demand. I would go gay for Kevin Conroy. What I’m trying to say is I have a thing for Batman. (My wife would say that “thing” is an “obsession,” but what do she and that psychologist at my intervention know?) Grant Morrison and Dave McKean’s Arkham Asylum is my favorite Dark Knight story. No other Batman tale is as visually arresting, artistically dazzling or as thematically rich as the hypnogogic menagerie of Carroll-ian revelry McKean and Morrison magicked up in 1989. The very loose inspiration for the game of the same name, Arkham Asylum locks Batman in the titular madhouse to be h(a)unted by a roster of his most challenging villains after the Joker springs them loose on April Fool’s Day. From there, Morrison weaves a symbolic, psychologically rich story that casts Batman in a whole new light, forcing him on to the path of the hero’s journey as he plumbs the depths of his own fear. Let’s just say it’s not every day you see the Dark Knight crying for his mommy like a little bitch. It also turned the Mad Hatter from a B-list joke to one of the absolutely creepiest villains in the entire rogue’s gallery. McKean's impressionistic, multi-modal art would only intensify the fractured, dreamlike logic that pervaded the entire story. Unlike the Bat-titles Morrison would pen later, here he has no interest in rehashing the mythos of the stoic Caped Crusader and his implacable quest for justice. Instead, Morrison breaks down Batman psychologically, forcing Gotham’s favorite crypto-fascist plutocrat to contemplate the warped motives that would drive a man to dress up in a rubber suit and spend his nights beating up the diseased and deformed, the impoverished and insane.

A representative passage:
“Afraid? Batman’s not afraid of anything. It’s ME. I’M afraid. I’m afraid the Joker may be RIGHT about me. Sometimes I… QUESTION the rationality of my actions. And I’m afraid that when I walk through those asylum gates… When I walk into ARKHAM and the doors close behind me… It’ll be just like coming home.”

The album: Tree of No Return by Tusk 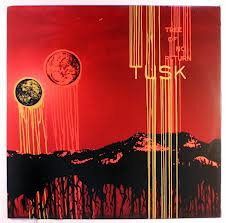 While not Batman themed (and oh does the world ever need a Batman themed grind band!), Tusk’s grind/sludge masterpiece is psychological horror tale about a dude getting lost in the woods, going insane from exposure and dehydration and eventually getting eaten by bears. Both Arkham Asylum and Tree of No Return are possessed by the notion of how your surroundings can affect your outlook (the relevant phobias being claustro- and agora-, respectively), something that has intrigued me since my first visit to the psychological gauntlet of the Holocaust Museum.  The wide open woods have never felt so fraught as they do in the hands of 75 percent of Pelican gone grind. The songs blast and snarl at the start but elongate and warp as the album wears on, drawing out into sludgy psychedelia as our protagonist loses not only his sense of direction but his sense of self. It’s much the same psychological breakdown Batman suffers in the shadow-haunted halls of Arkham.

Black swarms cut the moon apart. Leather wings carry rabid heart. Skyward hordes over moon-swept wood. Wraiths of madness fro blackest earth. Lunarscape shown bright, now gone. Nowhere lands orbit on. Unseen vissoth stir about. Hidden something , crawling sounds whipper out there from a rock, scratching round tree bark.
…
No more feeling like a human being. Necron spider limbs rattle along herky jerky from wilderness to beyond. No more feeling like a human being. No more.
Posted by Andrew Childers at 7:25 PM

Interesting, never listened to tusk before so I was expecting a lot given that A.A. is a pretty prestigious comparison.

Those vocals and left-field shifts do fit well for A.A and i'm surprised I can't think of many others who would fit save for thedowngoing