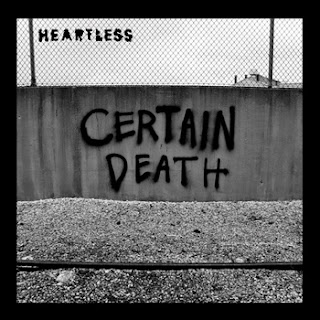 Heartless
Certain Death
Halo of Flies
Certain Death’s finest moments perch on that nanometer wide precipice that razors anticipation from action. Heartless are a hardcore band that revel in that held-breath moment that comes before unleashing chaos, and their eight song EP is a punk rock pep rally that’s there to prep you for the big game. While this Pittsburgh quartet never quite achieve that orgasmic release they keep building toward, you won’t walk away from Certain Death with your rabbles unroused either.
Like a leaner Black Ships or a less intricate Trap Them, Heartless yank the hardcore rip cord and set off in a straight line to stomp, obstacles be damned. The slow burner “Mute” eventually crashes through the scenery at a near grindcore pace, but Certain Death’s strengths come in the down moments where guitarist Rick Mauck nearly scrapes his knuckles on the pavement trying to get low. It lays a foundation for vocalist Cory Smith to bark his way into your heart has he rends his trachea at the world. Certain Death stumbles to its demise 11 minutes later with the bummer trip of its title track, a chug-a lug-roundabout that takes the peaks Heartless spent the EP cresting and bleeds its out to a gray faced death. But by then you already know that only death is certain.

[Full disclosure: Halo of Flies sent me a download.]
Posted by Andrew Childers at 6:49 PM