The book: Akira by Katsuhiro Otomo 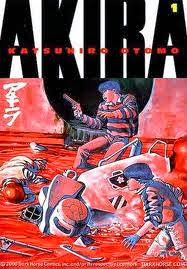 If all you know of Akira is Otomo’s own (admittedly awesome) anime adaptation of his masterwork, then you’ve only scratched the surface of the story. The film version barely touches on the events of the first volume of his six phone book-sized tomes, chronicling the plight of psychic street punks in decaying Neotokyo. The film ably captures the body horror aspect as Tetsuo’s newfound power rips his body apart, but it doesn’t quite capture the same sense of social horror as Otomo addresses the fraying ties that unite a country and the uneasy alliances that are left over when rigid hierarchies fall away and people are forced to shift for themselves. There’s certainly a lot more going on with Akira than bike punks on a rampage. Check out the books and widen your scope on an anime classic. Like Gojira before it, Akira starts with a thinly veiled allusion to the atomic bombing of Japan, bifurcating of the country's history and casting aside the rigid ordered past in favor of something new and unsettled. The unease that accompanies all sudden social upheavals strongly informs Otomo's tale as the cross section of complex characters each try to grapple with the unknowable power represented by the titular, godlike Akira and his insane chamberlain Tetsuo.

A representative passage:
“Ours is a young nation, and some might say it’s vulnerable! It is true we are yet weak, without laws or a constitution… …But a glorious future awaits us if we remain steadfast in our will and in our faith! Interference from the outside world will not be tolerated! We will repel all attacks whether from the United States, Russia… .. or even from Japan herself! … This land is our land!”

The album: Orphan by GrindLink 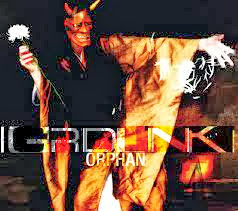 Orphan is a good theme because Otomo’s Neotokyo is a culturally isolated city full of people who have been disconnected from their past and their culture by the power of Akira. Cast adrift from its history and social institutions, Akira’s world is full of people who are forced to make compromised choices out of ignorance and necessity just to get by. GridLink’s freneticism and Far East fascination perfectly pair with the dizzying, neon-fried landscape that dominates Otomo’s masterpiece.

Keep our cards close it's how we wear our lies
Together but we are alone
Bridge of memories, that ends in death cycling like cover flow
Why are we trapped where only shadows fall?
How do we belong?
Punching holes in myself when there's no holes left to cut and regret does not absolve

It's all falling apart in my hands
It's all I have
Choked up
Bled out
Waiting for tears
Will they come?

Further our hearts
Our rendered voice
Across the world
Still the tears won't come
Posted by Andrew Childers at 8:10 PM

Article re-posted on Facebook. Also, No Funeral is back in business. I need to be reinstated into the Grindcore Justice League.