“It was you who inoculated me with selfishness, pride and cruelty, and you shall be their first victim. I now literally enjoy having a human being that thinks and feels and desires like myself in my power; I love to abuse a man who is stronger in intelligence and body than I, especially a man who loves me.
“Do you still love me?”
“Even to madness,” I exclaimed.
“So much the better,” she replied, “and so much the more will you enjoy what I am about to do with you now.”
“What is the matter with you?” I asked. “I don’t understand you, there is a gleam of real cruelty in your eyes today, and you are strangely beautiful—completely Venus in Furs.”
Without replying Wanda placed her arms around my neck and kissed me. I was again seized by my fanatical passion.
“Where is the whip?” I asked. 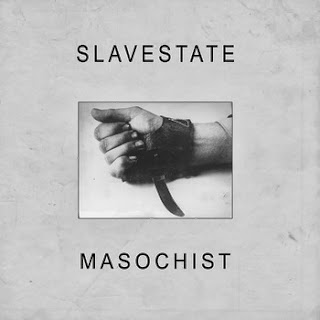 Slavestate 641A
Masochist
Grindcore Karaoke/Name Like His Master
There’s a very limited subset of humanity that wants to hear their shitty, repetitive, inconsequential lives recreated in a droning, stumbling, implacable audio form. Even noted musical bummers Mike Gira and Justin Broadrick had to take decade-long vacations into the realms of the ethereal and more upbeat (relatively speaking, here) before diving back into the broken pavement misery of daily survival.
That’s all an elaborate way of saying the Slavestate 641A is probably not for everyone, even in the target demographic of people primed to hoover up anything that boasts 66 percent of Robocop as its creative nexus. Masochist is unrelenting in its repetitive slow motion negativity. It just wears you down through sheer heft and indifference that take the most antagonistic output of artists like Swans and Godflesh as a starting point then beats them into submission.
The product of a 24 hour recording process that involved homebrew DIY recording tech, lashes from belts and near drowning while trying to scream underwater, Masochist lives up its name, grinding away at two songs carved from endless waves of slow motion repetition that soundtrack a lifetime of organs slowly failing and machinery sputtering to a half from routine wear. It’s an audio diary transported from the realms of Stephen King’s Dark Tower, the sound of a tired world that’s “moved on,” its technology and very reality wearing out and decaying in its wake.  The keening “Screwdriver” stumbles and throbs like a cyborg angina, a congestive heart failure of faltering components and broken down circuitry. The slithering “Reptile Enclosure” is more organic, the  suffocating throes of an animal too weary to even flail at the prospect of death. The song is attenuated droning near the point of stasis (think Khanate at their most dessicated), which probably makes it the more difficult of the two to truly appreciate as music. But it does get across its fundamental musical mission.
Slavestate 641A do not make feel good music to soundtrack your humdrum life. This is something a little more challenging that maybe deserves some additional thought but is admittedly targeted to a very narrow demographic set. If audio self flagellation is your thing, you can do worse than Masochist.
Posted by Andrew Childers at 8:43 PM