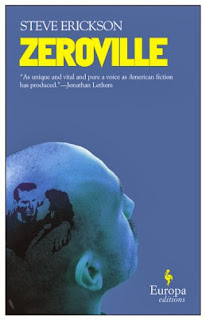 The book: Zeroville by Steve Erickson

Cinema has always haunted Steve Erickson’s best work from the stuttering movie critic protagonist of Amnesiascope (a doppelganger of the author) through the lost film masterpiece that lurks at the fringes of the narrative of Days Between Stations. But Erickson never gave himself over to the silver screen as wholly as in Zeroville, the story of film editor Vikar Jersome, who wanders into Hollywood with Montgomery Clift and Elizabeth Taylor from A Place in the Sun tattooed on the side of his head. His eventual rise to cinematic prominence parallels the advent of New Hollywood and the book is filled with veiled allusions to artists such as William Friedkin, Robert Deniro and John Milius. Vikar is described as “cine-autistic” by one of the other characters. Awkward and detached in social situations, he’s prone to repeating other people’s opinions verbatim when at a loss for something to say, but Vikar is completely steeped in the glamour of Hollywood’s golden age and his journey across Los Angeles is a pilgrimage that pays homage to the city’s movie landmarks from the hotel where Clift once lived (and supposedly where D.W. Griffith haunts) to the graveyards of nascent Hollywood’s most prominent stars.True to the Hollywood spirit, it's only fitting that Erickson be the first Good Reads author to get a sequel.

A representative passage:
“Fuck continuity,” says Vikar
Silence falls over the meeting. This is the first thing that anyone in the meeting has heard Vikar say.
“The scenes of a movie,” Vikar says, “can be shot out of sequence not because it’s more convenient, but because all the scenes of a movie are really happening at the same time. No scene really leads to the next, all scenes lead to each other. No scene is really shot out of order. It’s all a false concern that a scene must anticipate another scene that follows, even if it’s not been shot yet, or that a scene must reflect a scene that precedes it, even if it’s not been shot yet, because all scenes anticipated and reflect each other. Scenes reflect what has not yet happened, scenes anticipate what has already happened.” Vikar rises from his chair. Los Angeles is the City of the Real, whose stories are as old as time, where people go to hide from God, unlike the more hopeful, childlike people of New York. “Scenes that have not yet happened,” he explains to those around the table, “have.” New York makes sense to Vikar now—as he leaves the room, everyone staring after him –in a way it never did when he was there.

A bonus representative passage:
Vikar is wholly consumed by film. That is until he’s working on a film in New York City in the late ’70s and comes across a seedy bar in the Bowery that exudes a raucous rock ‘n’ roll noise he only knows as the Sound.

It’s not just a music, rather it’s the Sound, the real Music everyone has tried to tell him over the years that all the other music was when it wasn't.
Vikar is standing on the Bowery outside what seems to be a tunnel cut into a bunker. The sidewalk is crowded with more kids like he saw in St. Marks Place, as well as old people sleeping under newspapers and drunks stumbling through the crowd asking for money. A dirty barefooted woman shivers under a yellow awning in nothing but the paper-thin gown that patients wear in hospitals.
The address on the awning is 315. There are nonsensical letters on the awning that spell nothing. A mystifying hand-written cardboard sign on the black glass doors that says
HEARTBREAKERS
MAXXI MARASCHINO
SIC FUCKS
SHIRTS
and while nothing about this is comprehensible to him, the illicitly narcotic Sound is irresistible and he goes inside, the doorman eying him with wonder. 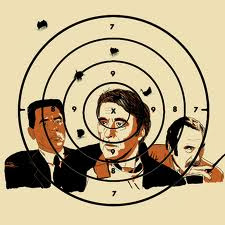 Obviously, no other grind band is as equally enraptured by the power of cinema as Graf Orlock. Where other bands are content to sample bits of dialogue here and there to set off their songs, Graf Orlock are wholesale remixers who spin new stories out of repurposed dialogue and samples jailbroken from the context of their original films. Like Erickson’s Zeroville, the Los Angeles EP is their love letter not just to films but to the city that births them. It’s a tribute to the ways film reflects the glorifies the city and the way the very streets and architecture have given birth to the movies themselves, an Oroborus of influence and mutual reinforcement that just can’t happen anywhere else.

A representative song: Just listen to the whole damn thing

Posted by Andrew Childers at 8:22 PM