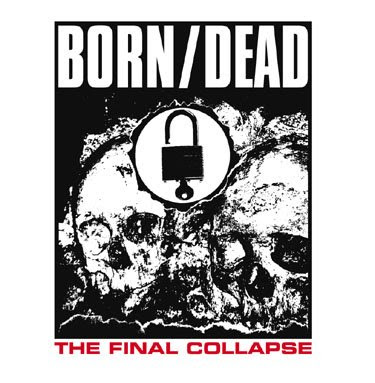 Born/Dead
The Final Collapse
Prank Records
Swedish punks seem to be intent on erecting a statue to Discharge drummer Tezz, but Oakland anarchists Born/Dead would like to remind their Scandinavian brethren that d-beat is alive and well in the U.S. of A.
Taken with Disfear’s Ride the Storm and the recent domestic release of Acursed’s Tunneln I Ljusets Slut, Born/Dead’s third Prank LP, released in November, is a raging reminder the 30-year-old punk offshoot can still circle pit with the best of them.
This 25 minute outing of gruff vocaled punk is not going to win any awards for originality – Tragedy influences abound – but it steams along with an impassioned energy despite a somewhat murky production job.
If you like d-beat, you know the deal: life sucks, society is evil and governments conspire to swipe your freedoms while an apathetical public consumes its way through life, “choking on their own lies,” according to the title track. If the ironically named “Nuance” isn’t didactic enough for you with all of its raving about “witch hunts” and crushed souls, the band also throws in cover of Crass, not a band known for its subtlety or sunny disposition. For all the frowny faces, the aptly titled “Assault” brings the album to a feverish, ferocious close.
Where Born/Dead truly break away from the millions of other dis-core bands is in its fleeing electronics passages, including the tail end of “The Final Collapse” and penultimate track “Eulogy,” filled with scraping feedback, distorted spoken word and fright fest soundscapes.
As they rage and rave their way through 10 tracks Born/Dead clearly think the world faces The Final Collapse, but there’s no respite in sight for the d-beat.
Posted by Andrew Childers at 8:55 PM

greetings to all.
I would first like to thank the writers of this blog by sharing information, a few years ago I read a book called guanacaste costa rica in this book deal with questions like this one.