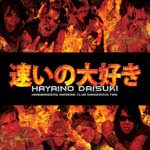 Hayaino Daisuki
Headbangers Karaoke Club Dangerous Fire
Hydrahead
Anyone who has soaked up the warm rays of the Rising Sun’s culture can tell you some things are so sublimely weird that Japanese is the only adjective that does them justice. Soiled school girl panties vending machines? Check. Thriving tentacle pr0n anime industry? Check.
All of this is really just a roundabout way of explaining why former Discordance Axis frontman Jon “Psychic Warlock Assassin” Chang and collaborator Takafumi “Speed Satan” Matsubara, of Mortalized, are dressed like tranny Malaysian hookers in the photos for Headbangers Karaoke Club Dangerous Fire.
Think of this four track kamikaze assault as Speak Engrish or Die. Like a shotgun wedding of early '80s thrash intensity to cock rock strut and swagger. Hayaino Daisuki come off like Faster Pussycat playing Haunting the Chapel (down to the energy drink-clutching, Slayer mocking back photo).
Packaged with a fanzine style lyric sheet, the somewhat joking mini-album pays tribute to Japan’s frilly shirted but thriving thrash scene during the 1980s. And surprisingly, Loudness only gets is a single T-shirt shout out. Instead it’s shredheads Mephistopheles and soaring-vocalled Anthem that light this band’s fire.
So we get Chang’s trademark yelp, a little rawer and throatier than in DA, layered with stabbing slices of thrash played at a consistently up tempo hardcore beat. Matsubara riffs and solos like there’s a Brian Slagel audition in the offing and not like he’s already signed to one of the underground’s more respected labels.
Tongues are firmly planted in rouged cheeks, but Chang et al clearly love this fromage fest. And it's a blast for the same reason Shaun of the Dead and Hot Fuzz rule while anything touched by Jason Friedberg blows: The best satire comes from people tweaking their heroes.
So guys, you’ve had your fun. Now how about that GridLink album you promised us this spring?
Posted by Andrew Childers at 8:19 PM