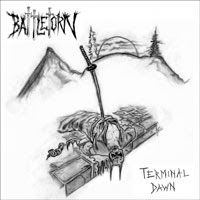 Battletorn
Terminal Dawn/Burn Fast
Mad at the World Records
A moment of silence please as we pour out a 40 for Tungar, the unfortunate recipient of the titular termination. This Big Apple thrash duo’s answer to Maiden’s Eddie, a hand-drawn bat-eared zombie/mage/reaper thingy, has graced the cover of all of their albums until taking a katana through the gizzard on their latest outing.
For retards like me who failed to properly secure their turntable arm before moving a year ago and completely fubared the record needle, Mad at the World has graciously combined Battletorn’s raging Terminal Dawn and Burn Fast EPs, previously out on vinyl, for a 17 minute rampage spanning 22 tracks. Do the math on that; though they bill themselves as thrash, Battletorn are perfectly cozy working the realm of grindcore’s 30 second system shocks. Just to save time most song titles are a single word, and when the concept can’t be reduced to a single morpheme, Battletorn compound song titles wherever possible (“Headbreaker,” “Hellbender”).
Like Tungar, the band’s music is a cobbled together Frankenstein’s monster composed of early DRI’s dirty rotten leftovers, the scum from behind Mick Harris’ drum kit and Siege’s battering ram surge, pounding out infamous 10 minute sets that have been the talk of the New York scene.
Like a live set, the songs are strung together like satanic prayer beads that are linked by thick tendrils of screeching feedback that span from track to track, emph 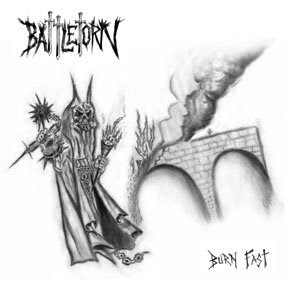 asizing the sloppy punk production. Though the Burn Fast tracks have allegedly been remastered, the whole affair exudes the kind of lo-fi production that would make your average black metal basement misanthrope grin through his corpse paint. If he weren’t, you know, so totally kvlt that he’d purged himself of all human emotion except for blackest contempt for his fellow man.
Unfortunately, in an all too common theme in my musical grazing, I’m once again late to the party on a totally awesome band (see also: Luddite Clone, Creation is Crucifixion). Though Battletorn have not officially called it quits, the two man band is currently separated by 1,000 miles, which could put a crimp on their output. Hopefully, they can transcend their geography and Tungar can burst from the grave. Wait he already did that on the cover of the Peace of the Gave 7”.
Posted by Andrew Childers at 3:29 PM

Hello I just entered before I have to leave to the airport, it's been very nice to meet you, if you want here is the site I told you about where I type some stuff and make good money (I work from home): here it is