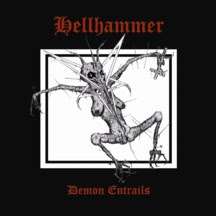 Hellhammer
Demon Entrails
Century Media
The 20 year feud between kissing cousins punk and metal is pretty silly in retrospect. Case in point, Hellhammer’s signature tune, “Triumph of Death.”
Courtesy of Century Media those of us who weren’t so kvlt they bought on this on vinyl for Euronymous himself in 1983 can appreciate this blackened fireball’s evolution from its earliest horror punk roots to its creepy crawly realization on Apocalyptic Raids.
A good decade before the longhairs and mohawks hugged it all out, Hellhammer, the plucky band of Swiss Satanists that could, were utterly savaged by critics for their unlistenable brand of sloppy, punky sludge and twisted obsidian thrash.
Long before its final 9 minute incarnation, "Triumph of Death" was an abbreviated slog through the sludge that gave way to unrestrained midtempo punk trotting flailed by downstroked guitar chords and churning, abyssal bass.
Owing as much to Amebix’s fried nuclear wastelands, the Misfits’ horror flick repertoire and Rudimentary Peni’s hallucinogenic death punk as they do to Venom’s cartoonish take on LaVey’s already cringe worthy inversion of Jesus H. Christ, Hellhammer set a bar for grotesque extremity at a time when Metallica and Flemming Rasmussen were humping each other’s musical leg in an expensive studio.
Nineteen tracks from three demos over two discs, Demon Entrails collects the band’s bloodiest, hardcore-flecked baby steps toward eventual immortality..
It’s also an interesting wormhole into Marty and Tom G.’s creative thinking. Grok Satanic Rites track “Buried and Forgotten,” which the dynamic death duo chose not to bury and forget (har dee har har), resurrecting many of the riffs under the Celtic Frost moniker as “Necromantical Screams.” The demo’s outro, with its industrial, martial beats presaged the experimentation that would characterize later efforts like Into the Pandemonium.
Hellahmmer was savaged by critics at the time, but hindsight’s a bitch like that.
Posted by Andrew Childers at 8:40 PM