Kick in the South: A Look Back at Prank Records and the Southern Crust Scene

Some of us spent the early 90s making questionable fashion choices involving flannel and debating the cultural importance of mopey rockstars with penchant for fellating shotguns. But way down south in the land of cotton, a loosely connected network of crust punks were about to set hardcore on its ass by soldering metal crunch to raging punk immediacy.
Southern crust was a musically and geographically diverse collection of musicians who lived the DIY credo out of necessity.
While Southern sludge – led by Kylesa and Baroness – is enjoying a current cache, that cultural currency escaped the scene’s crusty forefathers and –mothers, many of whom never grew beyond hometown hero status.
The enigmatic luddites in His Hero is Gone are one of Southern crust’s few bands to transcend Southern crust’s limitations, but back home in Dixie bands as varied as Damad, Antischism and Guyana Punch Line were keeping the punk rock home fires burning.
“The southern bands, besides the real heavy touring bands like Antischism, HHIG, Damad and Kylesa, have always been a really tough to sell,” Prank Records honcho Ken Sanderson said. “Scrotum Grinder [featuring Assuck bassist Steve Kosiba], Bury the Living and Guyana Punch Line would’ve been huge bands if they were from California, New York or Chicago where there was a scene and media to support them. But instead they spent most of their time as a band playing for the same small dedicated crowd in their hometowns.”
Curiously, the epicenter for the scene’s recorded output was 3,000 miles to the west in San Francisco where Alabama refugee and punk rock renaissance man Sanderson started Prank at a time when punk’s influence was on the wane.
“Hardcore was seen as largely cut out bin material by the late ’80s, early ’90s and few mainstream distros wanted to touch it since it wasn’t selling, but by having Mordam carry Prank (and later Six Weeks and Sound Pollution), extreme hardcore was again reaching places it hadn’t since the 1980s,” Sanderson said.
The same scattered geography that made the music hard for Sanderson to market also incubated each band’s signature sound, giving them time to experiment and grow without the pressure of conforming to a given scene’s bylaws.
“(By) virtue of isolation, there’s always interesting bands from there that come up with their own twist on things,” Sanderson said. “ Since they’re already so far out on a limb making that kind of music in their isolated town anyway, it might come closer to direct personal expression than playing to a pre-existing scene and sound.” 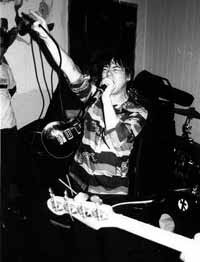 In small town South Carolina In/Humanity and Guyana Punch Line mastermind Chris Bickel was looking for “an outlet to relieve boredom” when he started his first band and laid the cornerstone for one of the scene’s forerunners.
“At the time I was living in a very small town in South Carolina and was one of the only people there into any kind of punk or hardcore,” Bickel said. “A guy named Paul Swanson moved down from New York sometime around ‘88 or ‘89 and had been involved with the hardcore scene there. It was kind of inevitable that we'd meet and want to play music together. Right about that same time I moved to Columbia, S.C., to go to school. That made it easier for us to make contacts with people as far as getting shows and doing recordings.”
As in all early DIY scenes, word of mouth predated today’s word of mouse.
“It was a really friends of friends kind of outgrowth that started from Dead and Gone, who knew Copout, who were a Memphis hardcore band that was supposed to be Prank’s second release. They broke up while finishing their LP, but the guitarist had a new band, His Hero is Gone that I ended up working with,” Sanderson said. “ Damad were friends of HHIG (and actually in terms of the ‘Southern crust’ sound, Damad were really the originators existing for a while before HHIG, though you could argue Buzzoven predates both and Initial State also has a lot of elements of the sound).”
One set of friends of friends was the Columbia, S.C., based In/Humanity who blended ferocious hardcore with Dead Kennedys irony to bring some much needed humor to a scene not known for bands with smiling faces. Just trying to imagine His Hero is Gone cracking jokes from the stage.
“In/Humanity was always a highly disorganized unit and we kind of just threw everything into the pot,” Bickel said. “Paul and I both had/have a healthy sense of humor and I had always been a fan of the Dead Kennedys and their use of humor and sarcasm to get across ‘heavy’ ideas. I don't think it would have been possible for us to take ourselves too seriously, though it's a fine line you tread when you don't want to be considered a ‘joke band.’ We took the issues we wrote about very seriously.” 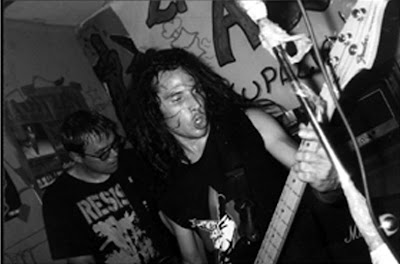 The aforementioned Memphis sourpusses remain Prank’s most enduring signature bands.
“The His Hero is Gone groundswell was evident from their first single,” Sanderson said. “They were a band that worked super hard, toured constantly and had broad-based appeal—metalheads liked them, people who liked hardcore liked them, and emo kids liked their lyrics and political impact. Monuments was an important record from the outset, highly anticipated and recorded and released less than a year after their Fifteen Counts of Arson LP. I think at the time, the band didn’t understand a lot of the things I was doing as a label at the time: sending out heaps of promos, doing all this promotion, working towards the situation we have now where it’s a record people still tell friends to check out. This pushing of the records and band was part of the reason the band split with the label, but now I think they understand what I was trying to do and we remain good friends, and I’m stoked those guys have remained active with bands, doing their own and other people’s records, bringing foreign bands on tour here and broadening the culture.”
Sanderson also had the Midas touch for finding criminally underrated bands, some of which, like Damad, have not received the level of recognition their watershed sound – presaging the modern Southern revival – is truly due.
“Burning Cold probably would’ve been a more landmark record if it was released closer to when it was recorded,” Sanderson said. “We had to wait a year for Pushead to do the artwork. It’s 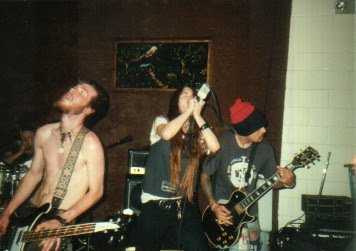 part of what makes the record great, but took its toll on the band as they sat around forever waiting to tour on their new LP. "
Never mind frontwoman Victoria Scalisi was visibly pregnant during the recording sessions, recalled sonic guru Billy Anderson, who flew out to Savannah to produce the album with a limited budget and even less time.
“We weren’t blessed with a whole lot of time, so there wasn’t a ton of room to experiment. But what time we did have was spent with everybody contributing their best ideas and performances,” Anderson said. “… At the time, I dont think anybody was thinking ‘this is gonna be a legendary album’ or anything like that. We were all just happy to be getting it done and in to the label on time! But it is a great record considering what the limitations were. I’m personally very proud of it as I think they are too.”
While the music may have been vital, all of the off stage crap that swirled around Damad, including a nearly yearlong delay before Burning Cold was released, crushed the band in their prime.
"Both Damad and Kylesa, sadly, were always hit with unbelievable strokes of bad luck and set backs, and Damad were eventually basically unable to really tour on Burning Cold aggressively and broke up not too long after it was released," Sanderson said. "Damad (and Kylesa) were/are great live bands but always a bit more of an acquired taste. Ultimately I think at the time they were perhaps ‘too metal’ for the punk crowd, which especially this decade has grown more conservative and coloring between the lines.”
Posted by Andrew Childers at 8:30 AM