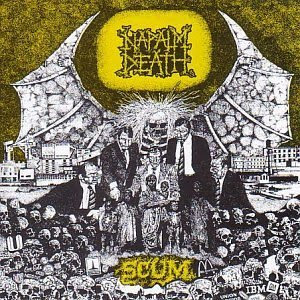 Napalm Death
Scum
Earache
1987
Notice one name that keeps popping up in this list? Napalm Death’s influence is unmistakable, and this quizzical album laid the groundwork for everything that came after. It’s a simple formula, but one that has been copied and built upon for 20 years now: Siege married to Discharge, cranked to 11.
While Napalm Death built and coeval bashers Doom, Unseen Terror and Heresy were strip mining a similar blitzkrieg hardcore approach, it was Scum were the sound, style and overall attack congealed and found a voice and a name.
These young Brummies were still punk as fuck – so punk they couldn’t even keep one line up together long enough to record a proper full length debut. Scum is a curious chimera of an album cobbled together from various incarnations and musical approaches that somehow creates a listenable whole.
Though the Bill Steer/Lee Dorian/Mick Harris lineup – augmented by ultimate grind scenester Shane Embury on follow up From Enslavement to Obliteration – has somehow developed a reputation as the band’s “true” incarnation, don’t overlook the contributions of founder Nik Bullen and a pre-Godflesh Justin Broaderick who penned some of the band’s most enduring anthems, including “Instinct of Survival,” “The Kill,” "Siege of Power" and ultimate punk piss take “You Suffer.”
That’s not to discredit the contributions of the B-side crew (rounded out by bassist Jim Whitely) which tightened the band’s sound, jettisoning the punk sloppiness for a slightly more streamlined metal attack, courtesy of Steer who was (re)animating Liverpuddlian zombies Carcass around the same period.
What really ties this album together and cements its place in the metal Acropolis is Harris’ drumming, a blurring blast of BPMs unheard of to that point. So fast, the band was known to fall out in giggles during rehearsals at the absurdity of it all.
Though Scum represented a subtle advancement over ’80s Britcore, Napalm Death’s true genius was in marketing – not a term typically found in metal’s anti-establishment playbook.. The terms grindcore and blastbeat were both succored at the infamous Mermaid club where a nascent Napalm Death kicked out the jams of what would be their trademark sound and spark a musical revolution that resonates today wherever young disaffected punks look to vent high speed frustration.
The grindcore machine first cobbled together in a Birmingham basement more than two decades ago, still rolls on to this day.
Posted by Andrew Childers at 7:46 AM