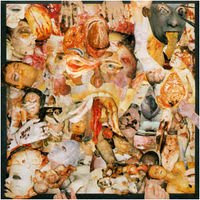 Carcass
Reek of Putrefaction
Earache
1988
Like Lovecraft’s Shub-Niggurath, The Black Goat with a Thousand Young, Carcass sired a plague of bastard young who endlessly ape every phase of the band’s existence, from the gore soaked roots straight through their melodic death second act and even their death ‘n’ roll denouement.
Goregrind as you know it today got its start here. Carcass took Repulsion’s horror film fixation and slowly dissected it on the operating table, and grinders have been scouring medical dictionaries and the Physicians Desk Reference in the two decades since trying to keep up with the masters.
From their first album, Carcass set the standard for guttural grunts, blown out, bass heavy production and medical atrocity lyrics. Until Reek, grind had never sounded so huge and menacing. Where Repulsion were really just a very fast thrash band and Brummy punks Napalm Death simply accelerated Siege’s hardcore template, Carcass heaved up gargantuan sounding riffs and beats all over metal’s shoes.
From meat collage masterpieces to pen and ink work for other bands, Jeff Walker was also instrumental in crafting grindcore and death metal’s look as well, designing the iconic Earache logo and providing the artwork for Napalm Death’s Scum.
Since the Carcass’ demise, Bill Steer has laid aside his bone saw for a stack of 70s riff rockers and Liverpudlian loudmouth Walker has become the reigning smartass of metal. Like one time label mates At the Gates, Carcass has risen from the undead, sans Ken Owen who is physically unable to handle the rigors or playing a live set following a horrific accident, to hit the stage once again this summer. Here’s hoping metal’s premiere grave robbers do more than rummage through their own mausoleum in the name of a quick buck.
Posted by Andrew Childers at 6:57 PM