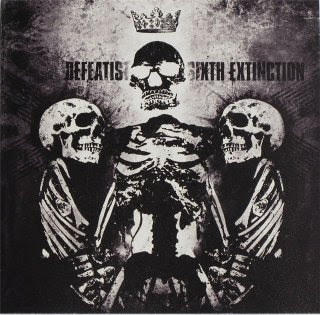 Defeatist
Sixth Extinction
Willowtip
With an album title that references paleontologists Sepkoski and Raup’s five major extinction events, New York’s Defeatist seem intent on hurrying along the evolutionary process with their proper full length debut, Sixth Extinction. It’s an album of grindcore blistering and noise rock corner sniping that relentlessly pummels its victim, probing for any chink in your survival skills. The piano wire garrote of “Heresy Delusion” fluidly transitions into the soft tissue trauma of “Fall in Line” like a Tyrannosaurus Rex-themed kata. The chumming thrum of “Death Holds Her Brood” sees its doomed thread spooled back in two songs later on “Ways of Weakness” and the spontaneous, shapeless noise whiteout of “Man’s Inhumanity to Man” will be immediately, comfortingly familiar to anyone who ever worshipped at the altar of Anodyne, where Defeatist’s rhythm section previously coalesced. Joel Stalling has turned in so many tooth chippingly awesome drum performances to date I almost forget just how much of a world eating badass he really is, particularly lock in with long time bass consort Joshua Scott and ex-Kalibas guitarist Aaron Nichols.
The twisty, askew stumble of “Without Will” is a wrenched amalgam of noise rock angularity and grindcore acceleration that succinctly encapsulates the Defeatist milieu, ram-rodding square peg elements of their prior efforts into grindcore’s humble round hole.

I have only two complaints and they’re relatively mild. First, the production on Sixth Extinction is feels the slightest bit duller than some of the tracks on Sharp Blade Sinks Deep into Dull Minds. While it’s particularly noticeable when you listen to them back to back, it’s far from a deal breaker. The second is one I’ve raised before: I keep waiting for Nichols to widen his vocal vista. Far too many of the songs feel trapped in a Rarr, rarr, rarr, rarr; Rarr, rarr, rarr, rarr trap that saps the dynamism of the music itself. But that’s so hard to focus on when a hungry horde of musical velociraptors are questioning your very fitness to survive.

[Full disclosure: Willotip provided me with a review copy.]
Posted by Andrew Childers at 9:50 PM

Looks like we're kind of on the same page about this album. I'm still enjoying it quite a bit.
So now this makes a triumvirate of bands I like that are derived from Anodyne (Tombs, Defeatist, Castevet). I've never heard a minute of Anodyne's music. I should probably check them out...

Same here. I like everything I've heard of Defeatist, and any mention of them includes esoteric references to this mystery cult.

i bought the outer dark completely blind, having never heard of the band simply because the art was that amazing and it was put out by escape artist. that's all it took to sell me on it.

wow. that was long.

as you can tell, i get excited by anodyne.

Well, thank you, as ever, for the recommendation. Thanks to the demented instant gratification known as the internet I am currently enjoying said albums. They will soon be a part of the CD collection. Joel Stallings is a fucking beast. Definitely worth the money.

i'm simply happy to serve as the carrier patient for the viral awesomeness of anodyne.

encapsulates
to the vista
of badass