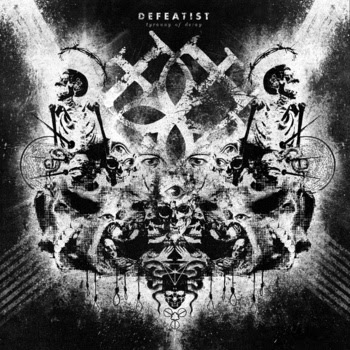 Defeatist
Tyranny of Decay
Bandcamp/Nerve Altar
Tyranny of Decay is a hedgehog's dilemma of a record. Defeatist have scaled back the acceleration enough that mere mortals can really appreciate just how crafty this New York City trio is, but the angular aggression (that recalls the band's Anodyne roots) is abrasive enough to keep all comers at an emotional arm's length. This is a prickly little beast that leaves an impression even if it won't be taking gold in the 100 meter any time soon.
Once again, Joel Stallings is a fucking monster behind the drums. He just naturally elevates the performance of everyone around him. This outing it's guitarist/vocalist Aaron Nichols who steps it up, finally expanding his vocal repertoire to match the intensity brought by the backline players. While they sacrificed speed to do it, that makes Tyranny of Decay probably Defeatist's strongest and most dynamic record. Of course, once Defeatist found their perfect balance that's when they decide to break up. But this pay-what-you-want download is a fine farewell for the gatekeepers of old school New York City grind.
"Mantle Retractor" is a waddling ankylosaurus of a tune; it's a squat bastard that revels in its own earthiness while "World Left Behind" seems intent on drilling its way through space-time and into the next universe by implacable force of will alone. One of the things I really loved about Tyranny of Decay is the way the lumbering "Mantle Retractor" obliterates the album's midpoint before being scythed away by the savagery of "Nameless Graves," giving the impression the whole album was sequenced for a vinyl release [Whoops, it is available on vinyl; thanks for the catch, Anon.] Defeatist were always consummate pessimists predicting apocalypse and catastrophe. They just got there before the rest of us.
Posted by Andrew Childers at 7:22 PM

Its sad that Defeatist broke up, Sharp Blades Sink Deep into Dull Minds would of been one of my "desert island" scenario cds, and something I would love for them to press on vinyl. The problem with Tyranny of Decay is exactly as you pointed out, it as much a step forward as it as step backwards, and for me the step back is more overreaching than the step forward. Still a fantastic record by any means though, just not their best in my opinion.

This is available on vinyl. Just link from their bandcamp or FB page.

doh. thanks for the catch.

I don't get the hype around this band, a point of contest for sure are the vocals. I find them inane, repetitive and too often occurring.They go through the motions, but i find little weight behind them.

the vocals have perennial been the weak link, no denial, strife. but the band is absolutely adept on the musical end. the stallings-scott axis may be one of the best rhythm sections in both noise rock and grind.