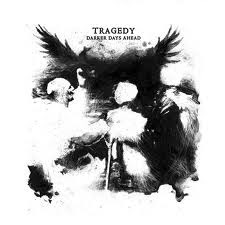 TragedyDarker Days AheadTragedy
Darker Days Ahead finds Tragedy in that awkward adolescent stage, something akin to Neurosis' transition 20 years ago from generic crust punk band to Lords of the Cosmos and All Time. Time will tell whether Tragedy's metamorphosis will be as fruitful, but Darker Days Ahead represents that acne-spotted, cracking-voiced phase everyone was so eager to leave behind.
It also continues the transition from high voltage punk toward something more sprawling and atmospheric. I thought Nerve Damage suffered from a dearth of urgency, but Darker Days Ahead is almost comatose instead. Rather than tight d-beat punk jams, this outing Tragedy spin out a series of lengthy (four to five minute) songs played through a cough syrup haze. "The Grim Infinite" sounds like Bolt Thrower played on a Walkman with dying batteries (and couldn't you just see that song title slotting nicely on War Master?).
Where previously Tragedy broke up their albums with acoustic or more ambient interludes, for their fourth album they've stretched those lulls out into full songs, turning in 40 minutes of music that teases -- but never achieves -- a cathartic crescendo. The title track comes closest to catharsis, melding the biker odes of Amebix with the gutter glam of Anti Cimex. But every time Tragedy seem on the verge of an explosive bout of fury, they pull back and sulk off in a resigned depression rather than rattling at their cage. The suffocating production does the album no favors either. Billy Anderson does to Darker Days Ahead pretty much what he did to Sounds of the Animal Kingdom, only stonier.
Ultimately, Darker Days Ahead is a frustrating listening experience. It's not the logical extension of their early d-beaten fare and they haven't evolved far enough beyond their roots to truly let their melodicism take center stage either. Instead we're left with an awkward transitional fossil that hasn't crawled beyond their roots but has yet to grow into its full potential either.

Posted by Andrew Childers at 7:20 PM

Agree 100% I expected awesome bouts of aggression and energy to explode from the pummeling slag they that sounds like an Amebix 45 played at 33rpm.Instead it just slunked around and went no where.

I worry if they're just another casuality to "let's pretend to be Entombed." like Magrudergrind's s/t, Nails and others.

Darker days ahead is a great album in my opinion.It might not d-beat but who cares!The melodies are classic tragedy material and the atmosphere fits perfect.I also dont get why there are people like you bashing Nerve damage which is an excellent record.

vengeance was an amazing album, the perfect blend of aggression and melody. i've felt the the last couple of tragedy records have been a step back. something about the production of nerve damage felt stifled. some really great songs ("incendiary") but they were missing the energy of vengeance. i think tragedy is trying to grow into something pretty awesome, but darker days ahead just isn't there yet. but i'm very curious to see what happens next.