Fear of Napalm(isms): Oh Cliché Can You See 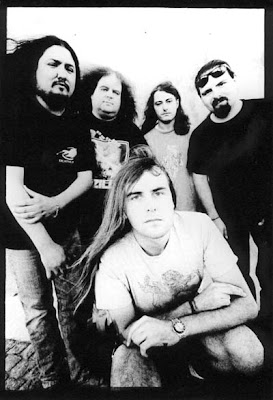 When last I poked (gentle) fun at Napalm Death, it was at the propensity of the band’s teenage incarnations to get all morbid and serious by ending their songs with the word die or death. A lot can be forgiven given the band’s youth. Would you want your youthful poetic indiscretions immortalized on silicon?
So this time, I’m gonna take a few whacks at the older, presumably wiser latter day Birmingham bangers.
It seems since the band kissed off Digby Pearson, some of their song writing has taken a turn for the clichéd, particularly in titling territory. The post-Earache albums have consistently featured cliché-titled songs. And as any Creating Writing 101 prof will tell you, clichés are signs of lazy writing that should be avoided like the plague.
Unlike early Napalm Death’s death obsession, which crossed lineups, this time around the culprit is largely one person: Barney Greenway.
Don’t get me wrong, mofo knows his way around a mic and I can’t imagine another frontman who commands a stage like Barney (Mark to his ‘rents). But he’s penned the majority of the band’s lazily-titled songs.
The unbroken streak began right out of the Earache gate on 2000’s Enemy of the Music Business with “Necessary Evil.” I don’t know if it’s necessary but the evil oozing from that song was repeating that phrase continuously.
And that’s the problem underlying the cliché thing. Not only do they trot out one worn out phrase after another, but they feel the need to pound that sentiment home by endlessly repeating said catch phrase through the song. When a line wears out its welcome in the course of a two minute song, we’ve got a problem. Where a lyricist of Jello Biafra-ian status could turn a cliché on its head with a dose of irony, Greenway just gives it to us verbatim.
And the punishment in capitals did not let up on 2002’s follow up Order of the Leach, which gave us the “Out of Sight, Out of Mind” and “Lowest Common Denominator” twofer.
Sadly the annoyance trailed after the Brummie bangers as they migrated to metal major Century Media, handing us the repetitive “Silence is Deafening” and “When All is Said and Done” (one Mr. Shane Embury can take a bow for the latter, though).
But it’s not like we it should be surprised. Napalm telegraphed this particular Napalmism on 1994’s somewhat underrated Fear, Emptiness, Despair, album that is “More Than Meets the Eye.”
So with the word out Napalm are readying their 13th studio album, I ask you, what should their next ditty be called?

A. “A Penny Saved is a Penny Earned”
B. “A Bird in the Hand”
C. “An Apple a Day Keeps the Doctor Away”
D. “All Work and No Play Makes Jack a Dull Boy”


Feel free to leave your own suggestions in the comments.
Posted by Andrew Childers at 8:46 AM

Nice! I'm not witty enough to come up with a good one though.

ha. didn't think of hitting google stats. thanks for crunching the numbers on that one for me. take a few more tired cliches outta petty cash for your trouble.