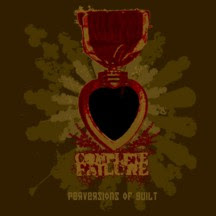 Complete Failure
Perversions of Guilt
Supernova
I was all set to spew invective from every orifice based on what I’d heard about Perversions of Guilt’s catastrophically bad production, even making the hackishly obvious joke about the band’s name. But a funny thing happened on the way to the snark fest I had lined up for Complete Failure’s debut album, the fucking thing grew on me like an ebola outbreak despite Steve Austin’s habitually half assed studio meddling.
To get it out of the way, yes, Perversions of Guilt sounds like the aural equivalent of what you pump out of your septic tank, but it’s fucking grind, ain’t it? I think we can all agree it shouldn’t be too clean, and there is a pretty damn sweet half an hour of well written grind lurking under that muck stained production job once you give it a chance.
Featuring drumming beast Mike Rosswog, masochistically returning to Austin’s fold after playing on Today is the Day’s Kiss the Pig, it’s Rosswog’s prior digs, Circle of Dead Children, are a good reference point but not a perfect comparison. The whole album seems to draw from Pittsburgh’s supremely underrated death/grind scene, which grew up around Willowtip records (see also: Creation is Crucifixion, Sadis Euphoria, Fate of Icarus).
And Complete Failure is not that far from CODC’s Human Harvest (another album graced by Austin. Seriously, there’s a reason Converge only let that guy near one album,). The drums are pushed way to the front, fine given Rosswog’s talent, but the guitar and bass parts, if you strain hard enough or listen through headphones, do reveal occasional flashes of solid songwriting bulldozering through the monochrome gloom.
A man cannot live on blast beats alone, and Complete Failure are also comfortable leaving the death-grind reservation to go grazing among the spare grass of the doom prairie with varying degrees of success.
Six minute death dirge “Cured Through Constant Degradent Criticism” is droney enough I kept waiting for the Stephen O’Malley cameo. That song in particular is a standout, stoking the tension between the ringing guitars and the orgasmically building blastbeats underneath.
But some of the slower tunes, particularly the interminable closer “A Disinviting Self Restraint,” a 10 minute slog through a swamp filled with one chord, could use some serious editing. But on the whole, the down tempo stuff does provide the nice breather between Rosswog’s forward-in-the-mix beatdowns.
One CODC trademark that fortunately got left on the cutting room floor was that band’s Deliverance-style squeal like a piggy vocals. And I’m not bullshitting when I say frontman Joemack mirrors the timbre and tone of a Skitsystem-era Tomas Lindberg.
If you’re waiting for Circle of Dead Children to finally get back in the studio after frontman Joe Hovarth contracted a near-fatal staph infection, Complete Failure can ably fill your death-grind quotient, but clearly this band is looking to step out of the shadow of Rosswog’s prior digs to create something different. (And BTW, CODC, still waiting on you guys to return those interview questions you’d promised to answer like six months ago. *cough* Just sayin’.)
Until that happens, ignore the hype and give Perversions of Guilt a spin and judge for yourself.
Posted by Andrew Childers at 7:56 PM