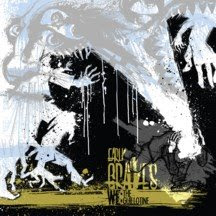 Early Graves
We: The Guillotine
Metal Blade
It’s pretty obvious the guys in Early Graves spent the better part of the last decade absorbing some of the best albums metal has to offer because the San Fran hardcore troupe’s debut wears its influences on its silk screened long sleeve.
Formerly known as Apiary (seriously, you named yourself after a fucking bee hive?), Early Graves shed some members, the masturbatory tech noodling and that horrific fucking name to reinvent themselves as a quality hybrid hardcore band with more than a passing familiarity with the royal jelly of grind, death and thrash.
Pastoral instrumental “Rest” owes a nice royalty check to a pre-suck In Flames’ “The Jester’s Dance,” “Ghosts Among Us” so apes Mastodon’s aquatic swagger I kept waiting for a Scott Kelley cameo and “Here There Be Monsters,” an eerie spoken word bit over jagged riffing could be an outtake from Today is the Day’s Sadness Will Prevail, fitting given Steve Austin’s production job (one the his best in, like, ever. Seriously, it’s so good I didn’t realize he was connected in any way [beyond a vocal cameo] for about two weeks.).
Even the art owes a debt to the Jacob Bannon school of gritty graphic design by way of the covers to Seijun Suzuki’s go-go-riffic 1960s yakuza films.
When they’re actually playing their own songs, Early Graves unleash an enjoyable if not wholly original hellbroth and hardcore and metal that consistently zips along at purring double bass thrash tempos. I hesitate to use a term as loaded as metalcore, but Early Graves are metalcore in the vein of earliest Cave In and prime Burnt by the Sun. No mascara, no bullshit.
Vocalist Makh Daniels’ gruff bellow even carries some of the force and clarity that characterizes BBTS’ Mike Olender’s delivery, but he could stand to change up his approach every so often just for variety’s sake.
Imitation being the sincerest form of flattery and all that, Early Graves clearly show some real promise if they can harness their influences into a unique voice rather than admirable homage. Give them a couple more albums and Metal Blade may have a reason to still exist beyond keeping old Slayer albums in print.
Posted by Andrew Childers at 9:03 AM