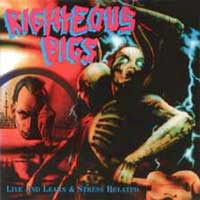 Righteous Pigs
Stress Related/ Live and Learn
Metal Mind
Long before Pig Destroyer and Agenda of Swine, Las Vegas quartet Righteous Pigs were grind’s other white meat.
Turns out there’s a reason Righteous Pigs is best known as the-band-Mitch-Harris-was-in-before-he-joined-Napalm-Death.
Polish label Metal Mind snapped up these two albums, the band’s sole output, after Nuclear Blast let them slip out of print. And after a couple of listens you can kinda tell way because time has not been kind to these songs. From the juvenile stabs at stupid humor, the nigh unlistenable production and the Tron-tastic artwork, Righteous Pigs simply haven’t aged well.
The Pigs’ final album, 1990’s Stress Related, smartly leads off this hour of grind, because those songs, longer, better written and better sounding, show the quartet with their best hoof forward. The disc’s second half, 1989’s Live and Learn, is more traditionally grind and is rife with sloppy blast beats (that’s not a compliment, btw) but the whole package is hopelessly buried under a tinny, trebly production job that no digital mastering will ever rescue.
Frontman Joe Caper eschewed the even then trademark guttural vocals for a full throated punk shout that the liner notes laughably compare to Henry Rollins. Unfortunately, that clarity is wasted, especially on Live and Learn, on a handful of tunes that trade in scatological junior high humor (“Stool Softener,” “Hidden Zit”) or outright misogyny (“Stone Cold Bitch,” “Celibate Tease”) that fail to muster the “I can’t believe he just said that charm” of prime Seth Putnam.
Musically, Righteous Pigs may have shown promise, but they never seemed to channel their skills toward a unified goal. At times the band sounds like they were playing against each other as though four people were jamming out four different songs. The young musicians also clearly could have benefited from a strong editorial hand in the production booth to sculpt and mold the germs of songs hidden within.
A conspicuously weak link in the pig trough was drummer Scott Leonard, whose not-quite blast beats/snare drum rolls consistently stumble and fall short, undermining the whole outing.
While Stress Related and Live and Learn primarily exist to showcase the rudimentary songwriting talents of Harris, his skills are displayed more effectively on his Defecation solo project or any random post-Earache Napalm Death album.
If you have to own every piece of the Napalm Death family tree, this is for you. Everyone else can happily spin Order of the Leach one more time and be just as content.
Posted by Andrew Childers at 7:58 PM

will remain one of the best hc/grind ever. those sloppy blasts are perfect and all these very well known bands today are so boring.

Totally love Live and Learn, Stress Related not so much