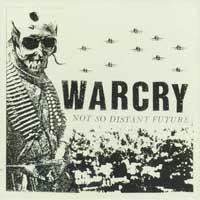 Warcry
Not So Distant Future
Feral Ward
I’m gonna say something heretical here just so you know where I’m coming from. Tragedy’s last album, Nerve Damage, kinda disappointed me. Don’t get me wrong, the song writing was as stellar as d-beat gets and the musicianship was top tier, but it was the flat production that killed that album for me. Vengeance had that awesome, raw sound that gave the songs that needed oomph, that sense of urgency that lets punk continue to thrive despite generally not advancing the songwriting craft an iota since “Blitzkrieg Bop.”
Seems like Todd Burdette (Tragedy/ex-His Hero is Gone) may have had the same quibble because side project Warcry’s latest makes none of the same mistakes while pretty much treading the same punky waters that birthed his previous bands.
With His Hero Is Gone’s moody melodicism and Tragedy’s propulsion, eight song mini-album Not So Distant Future doesn’t stray far from the d-beat reservation but manages to add a soupcon of rock swing and swagger to the sound just to shake up the mix. “White Flag” even trots out a hair-whipping deedly-dee solo just to shake up the dun dun datting. Follow up “The New Age” puts on a punk rock clinic for rhythm sections, led by the synched galloping bass and drum battery that slingshots the song forward.
While self-described “anarchic noise destruction corps” Warcry don’t bring much new to the turntable (black and white art: check; apocalyptic ramblings about the world going to hell in a Hot Topic bag: you betcha), Burdette et al play and howl with enough conviction and intensity that it gives Not So Distant Future a palpable sheen of integrity and sincerity.
Minor critiques of Nerve Damage aside, Burdette has never put his name to anything less than near-perfection no matter what monicker he gives his crusty, d-beat ramblings and Warcry adds another wonderfully dingy patch to his jacket.
Posted by Andrew Childers at 6:44 PM

hey good writing dude, I've commented before but i'm just another passerby. I wasn't thrilled on the tragedy releases either, seeing them live in 2006 was great but when I saw them this year it had already lost its edge to me. Obviously, Warcry is for the true d-beat fighter. I'm not sure it needs to be written that d-beat will not add anything new, the people doing new stuff with d-beat are typically referred to as neocrust bands or just the frontlines of the avant garde. D-beat bands describe themselves as anarchic noise because it has ascended in the punk universe as one of the proven drives of those who live the anarchic-noizy lifestyle. The more a D-beat band comes closer to this drive, the better. If you were to do something new, it would just be neocrust or perhaps avant garde, which to me is fucking great and truly anarchic. But for D-beat purists, and they are the majority, there is grounds to be made inwardly instead of outwardly, and I really enjoy this aspect of d-beat. But if people are going to be serious about anarchic lifestyles, the open mind you have will always take you around the world of music/sound/noize, needing labels only to know what the intent of the artists are, and then only to find out that its not even pure crust at all, its crossover material. For now there does not seem to be a key into uniting the different punk factions, maybe if punks opened themselves up to the rest of the world including the common working man, then we'd see a universal punk arise. (A) (E) (P)