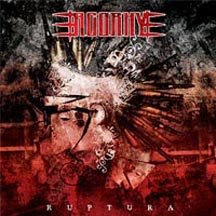 Agorhy
Ruptura
Humanos Mortos
You can’t be Brazilian and play metal marinated in a sweet tribal sauce and not expect the occasional Sepultura comparison.
Hell, singer Aramos even sounds a lot like Max Cavalera back when dude was still pissed off at more than just Andreas and Paulo. Which is fucking awesome since Sepultura was always my favorite thrash band right up until they broke up after Roots and never once considered hiring a crappy replacement singer and puking out horrifically lame nu-metal albums until they farted away into irrelevance (*fingers in ears* I know of this Derrick Green of whom you speak. I can’t hear you Lalalalalalalala).
So yeah, Agorhy are Brazilian and kick off their debut full length with some tribal samples and generally channel Sepultura circa Chaos A.D. and Roots but their thrash is blended into a headhunting foundation of Cattle Decapitation grade death metal. Add in the occasional sweeping arpeggio to remind you of how faceless and lame that last Dying Fetus album was.
Ruptura brings eight new songs plus another 11 tracks from their two previous demos for over an hour of circlepitting grind, death and thrash goodness.
Drummer R. Pina hacks out a hunk of the spotlight for himself with tightly controlled double bass rolls, snappy blast beats and tribal-inflected fills that give the chunky death metal tunes some personality beyond all the countless other chunky death metal bands.
I left my Portuguese phrasebook in my other pants, but Metal Archives tells me Agorhy have a fondness for penning ditties about human sacrifice and this whole sanguinary mess would have awesomely scored that scene in Mel Gibson’s surprisingly enjoyable bloodbath Apocalypto where the Mayan captors gleefully lop the noggins off of a few dozen unfortunate captives. (And yes I’m well aware that the Mayans were nowhere close to Brazil, but we’re suffering from a dearth of indigenous themed South American flicks to pull from here.)
Though it’s awesome to have this band’s entire output to date cobbled together on one handy sliver of plastic, the sheer hour-plus girth of the concoction and the demos’ rougher production can make Ruptura a bit much to absorb in a single sitting. But taken in smaller bites, Agorhy cannibalize meaty slabs of extreme metal and roast them over a camp fire while regaling each other with tales of primal gods who can only be sated with offerings of blood.
Posted by Andrew Childers at 9:37 AM