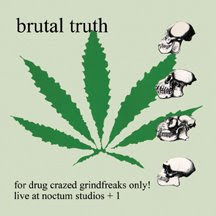 Brutal Truth
For Drug Crazed Grindfreaks Only!
Relapse
Am I the only one who remembers when Relapse was a killer label that actively sought out new artists rather than just convulsively hoovering up out of print goodies that other people had released years before?
With Brutal Truth back in the studio laying down tracks for their first album in 11 years, Relapse snapped up and re-released this Solardisk EP from 2000, recorded in New Zealand on tour for their finest album, Sounds From the Animal Kingdom. For those of us who missed the classic lineup live: It’s just a band busting out tunes live in a studio. It’s refreshing to hear instant classics “K.A.P.” and “Jemenez Cricket” liberated from Billy Anderson’s uncharacteristically rickety production to become the rabid, snarling man-beasts they were meant to be.
New York’s stoniest leave no release unpillaged during their 20 minute assault, tearing through raw versions of “Walking Corpse” (complete with hilarious spoken word intro in lieu of the classic sample), “Choice of a New Generation” and “Let’s Go to War.” And true to their weirdo credo, BT also throw in an untitled track of low key electronic meandering that is worth a listen but definitely won’t be a selling point for anyone into the band’s high speed assault.
Despite the title, you don’t have to be drug crazed to enjoy a nice contact buzz from this short album, but it’s definitely one for the grind freaks who may have missed them in their prime.
Posted by Andrew Childers at 7:04 PM

I disagree on the grounds that being drug crazed (especially being crazed on Marijuana as the cover suggests) will only enhance the experience of the CD.
And I got a rad patch with my CD, what about you.

very good point. i neglected to mention the mary jane patch for all of you rocking the throwback sleeveless denim. good catch, shanetera.
and if a bowl or two improves the experience, i am the last person to argue. but i can attest it kicks just as much ass sober.

"...but it's definitely one for the grind freaks who may have missed them in their prime."

I finally got a chance to catch them live in NYC recently on a killer show. They had Malignancy, Devourment and Macabre all opening for them. A hell of a show! Brutal Truth played a few new songs from their upcoming album and while its a little tough to get a proper grasp on something from hearing it live once it all sounded very promising.