Warriors of Ice: Sayyadina Unthaw New Music (How Swede It Is Part 3) 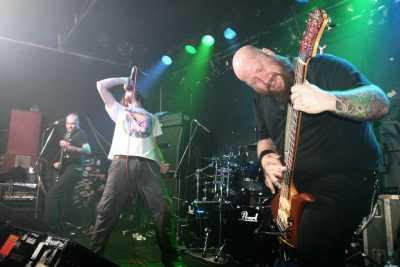 Asking Swedish grind dervishes Sayyadina about the thermostat settings in the studio when they laid down tracks in August for an – as of now – stalled split with a – so far – unnamed American band, may sound retarded and random, but in my head the question makes sense.
The band’s last album, Mourning the Unknown, was that rarest of grindcore snipes: a disc that actually made me pore over the lyrics as I delved into the frigid meditations on depression and anxiety that layered its exquisite performance. Take a minute and go pull it out. Count how many references to cold, winter and ice you find. The sheer number even startled guitarist Jon Lindqvist, the band’s wordsmith.
“Preparing for this interview I read through the lyrics and I was a bit freaked out, but I think describing a depression is done very effectivly through those ‘cold’ words,” he told me via email. “If you got anything out of it that is nice. Dealing with depression and nightmares and violent fantasies and struggeling to get better and constantly falling back is hard work. Describing it as it happens is even harder.”
And with Mourning still in my regulator rotation, Lindqvist’s bandmates are eager for him to go spelunking the benighted crevices of his psyche yet again.
“Jon will continue to spit out new lyrics until his head is just a psychic vacuum,” drummer Ove Wiksten said.
But Odin only knows when we might hear the songs at this point. It’s a tale as old as time. Band meets label. Band agrees to work with label. Band loses label. Band tries to get label back.
While Sayyadina collectively declined to name names, the split they had hoped to put out soon seems to have fizzled and the fate of the songs remains a big question mark as of right now.
“It seems like that split isn't happening anymore, but hopefully we'll get to do something on or through their label anyway,” according to bassist Andreas Eriksson (who btw, big shout out, took the thankless job of corralling his bandmates for this interview, so big ups to that guy).
Hearing the songs are sitting in the vault is even more exquisite torture to hear Sayyadina gush about them.
“Great songs. Best songs we've written this year! What will happen? Who knows? Working with labels is a pain in the ass. Always,” Lindqvist said. 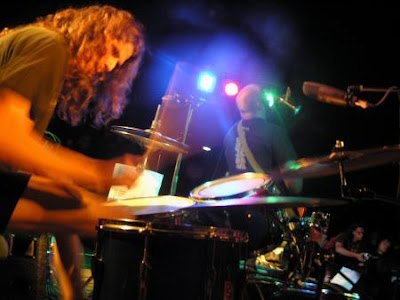 “The writing of the music for this recording combined with how we recorded it felt really good,” Eriksson added. “It was very intense and not so overworked as our stuff has been in the past. Or felt like when we recorded it anyway. The songs feels more alive somehow now for the first time in a very long time.”
While Lindqvist didn’t let me peak in his diary to suss out potential lyrical themes, but he did assure me Sayyadina are not about to become another generic political or gore band. As a consolation prize, he did offer some advice for those of us who will be diagramming Sayyadina’s sentences should the new songs see the light of day.
“I think Sayyadina’s lyrics have always been on a really deep personal level, and I think that is the only way I can write,” he said. “I don’t get the whole gore thing. The band is really happy if there are any lyrics to begin with. I'm not very interested in other peoples lyrics (especially) or ‘out-write’ brilliant Carcass lyrics, I'd rather read books. Talking about Mourning’s lyrics, though, it was really hard to get all of them together. They grew out of small sentences that I think said it all and then you have to write 15 more sentences saying the same thing or even try to develop or describe what I was trying to say. (And the key sentence is never the first five words.)”
If Lindqvist needs any lyrical assistance, I suggest he take a gander at page 66 of Webster’s New World Thesaurus (1990 edition – I know I need to upgrade) for all the permutations of cold. Meanwhile, I’ve dog eared page 26 looking for synonyms of awesome.
Posted by Andrew Childers at 5:41 PM

Labels: how swede it is, interviews, mourning the unknown, sayyadina

This band caught my attention as having the best material on Relapse's Swedish Assault comp but their follow up debut Fear Gave Us Wings really didn't have much staying power for me. It was good to see Mourning the Unknown was a much stronger second album. I'll have to go back and read through the lyrics for it.