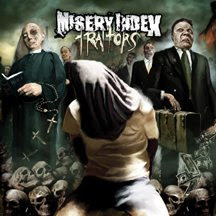 Misery Index
Traitors
Relapse
Not content with simply being the Greg Ginn for a new generation of punks, Converge guitarist Kurt Ballou is rapidly establishing himself as one of the premier metal producers in North America. This year, alone, he has helmed both Disfear and now Misery Index to the career highs, at least on a production front.
Forgive me, but I just can't get into Misery Index. For some reason, Baltimore's finest just never seem to itch my blastbeat scratch.
While every instrument mercilessly rips through the perfectly balanced fader work on Traitors, it is just another Misery Index album loaded with straight ahead death/grind rampage and frothing political diatribes. If you loved Retaliate or Discordia, Traitors will have you sporting metal wood. Band mastermind Jason Netherton remains one of the brightest and most articulate lyricists working in metal today, tarting up tried and true cock-slaps at politicians, churches and corporate corruption with fresh imagery and honest rage.
But inevitably my attention fades about halfway through any Misery Index album.
Ferocious instrumental “We Never Come in Peace” kicks the album off with a bang, midtempo chug giving away to drummer Adam Jarvis’ exceptional footwork (which should have dedicated MI fans asking ‘Kevin Talley, who?’). My blood keeps racing through first true song “Theocracy” and my fist throws up horns of its own volition until sometime after the mid-album Bolt Thrower style panzer assault of “Ghosts of Catalonia.” After that, I start to lose interest and all the songs begin to blur into an indecipherable blastbeaten mush.
If you love Misery Index, you probably already have this. But, for me, I’m at a loss to explain the critical praise and major label money being heaped on a pretty run of the mill death/grind outfit, albeit one with top shelf production.
Posted by Andrew Childers at 8:54 PM

I agree completely. Musically, Misery Index is too fucking bland and doesn't live up to its name at all. Maybe death-grind is the new metalcore and you just need to market it right eh.

they must be doing something right because like a chump, i keep buying these things.

Lyricism aside, the material sounds slightly dated to my Kylesa-, Baroness-, Genghis Tron-encrusted eardrums. I am not running out to buy the latest Rodrigo Y Gabriela in spite but why Kayo Dot is intriguing to me, that's the REAL question!?