G&P review: Retaliation (How Swede It Is Part 1) 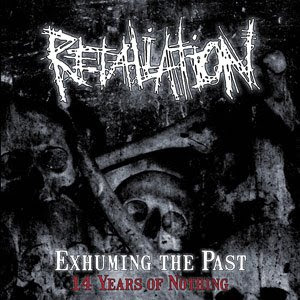 Retaliation
Exhuming the Past: 14 Years of Nothing
Selfmadegod
Anyone who is functionally literate and wastes about 5 minutes here will figure out that I *heart* Swedish grindcore and punk. Like listening to both discs of Nasum's Grind Finale back to back. Which was good training for Retaliation's 80 minute, 85 track (115 song) discography behemoth.
For much of their existence Retaliation has vacillated between the Carcass copping medical malpractices of Regurgitate (“Nailgun Rectal Entry,” the Acrid Genital Spew demo) and planting one Doc Marten in the festering polipunk demimonde that spawned Nasum (“Things Never Change,” “No Peace”). The combination over the years has produced a hybrid, deep seated misanthropy not unlike Rotten Sound and their ilk.
Unlike other tedious compilations, Retaliation don’t present their songs in a straight chronological/antichronological order, forcing you to either suffer through six EPs of horrible sounding demos up front or alternately despair as a decent sounding album spirals downward into murky unintelligibility. Rather, the songs jump around through their catalogue, while the inconsistent volume may make for a difficult headphones experience, the ordering manages to keep you interested by varying up the sound.
And Retaliation can uncork some doozies, especially when they dissect someone else’s tune. Smack in the middle of the album, like a stray dandelion growing out of a sidewalk crack, Retaliation bust out a savage cover of His Hero is Gone’s “Like Weeds,” sheering away the original’s haunting melody bits and turning it into a savage cudgel before practicing some amateur dentistry on your canines and incisors.
Retaliation struck back again this year with their latest album, The Cost of Redemption, but Selfmadegod’s infuriating international ordering system has so far stymied my efforts to land that disc [Warning from Superego: Don’t even think about making a Polish joke here]. But it’s not for lack of trying because Retaliation has earned a prized place on the Ikea shelf where I keep my Swedish goodies. It’s rare to find a band that will be able to unite the disparate branches of the grind family tree around a common love of blast beats and disdain for humanity.
Posted by Andrew Childers at 8:31 PM

Labels: discographies, exhuming the past 14 years of nothing, grindcore, how swede it is, retaliation, reviews, selfmadegod