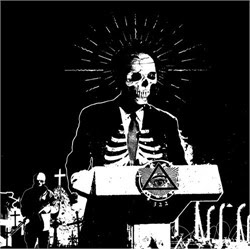 Kill the Client
Cleptocracy
Willowtip
Anybody with the privilege of being Kill the Client mouthpiece Morgan’s MySpace friend will tell you that he’s a prodigious sender of bulletins and he took it particularly hard when (small L) libertarian upstart Ron Paul failed to conquer the Republican primary, ignite a guns and torches in the streets uprising or generally alter American existence in any kind of meaningful or noticeable way.
With Paul’s blimp in drydock and the rEVOLution currently on hold, Morgan and his co-conspirators channeled their election year frustration into a second vicious full length chapter in their elite grind journal. If you’re looking for the down tempo respites that broke up Escalation of Hostility, Cleptocracy will bodycheck you like Scott Stevens catching a forward crossing center ice with his head down. Produced by bassist James Delgado, Cleptocracy is a circular saw assault on the senses that offers little quarter from the relentless blastbeat mugging and even relatively tame tunes “Downfall” and “Evidence of Injustice” stomp along at mosh pit speeds.
The explosive “Christian Pipebomb” is practically onomatopoetic, a concussive detonation that sends out indiscriminate waves of shrapnel rending flesh and bone. “False Flag Attack,” debuted on the This Comp Kills Fascists disc, posits 9/11 was an inside government job to accrue more power to the Bush administration (which is not really surprising, Morgan straight faced dropped references to Illuminati conspiracies to rule with world in conversations with me) while “The Lies” condenses Christopher Hitchens’ God is Not Great into a minute long high speed diatribe.
In-demand drummer Bryan Fajardo must be making his bid to be the next Dave Witte cuz in addition to back stopping Kill the Client, the guy has also anchored GridLink this year and just joined Phobia fulltime as well. It only takes a few measures into lead off song “Divide and Conquer” to see that Fajardo is worth whatever these bands are paying him.
With that kind of anchor propelling their ferocious second album, Kill the Client are staking their claim as one of grind’s leading voices, and I, for one, am not going to dispute that.
Posted by Andrew Childers at 6:54 PM

People get paid to play grindcore? Astonishing!!
Texas do no wrongs, only writes.

Just one of the many awesome up and coming Grind bands. Also, are going to Maryland Deathfest?

hey apoc, probably missing the deathfest again this year. my day job can be pretty demanding and unpredictable and going to shows just hasn't been in the cards the last couple of years.

and anon, i hadn't heard that but either way fajardo is worth his weight in blastbeat gold.