G&P review: After the Bombs 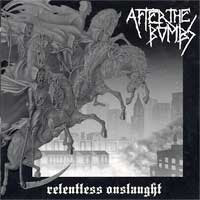 After the Bombs
Relentless Onslaught
Vex
Please step away from the reverb, ma’am, and no one gets hurt.
True to Canuck collective After the Bomb’s throwback ’80s crossover style, front woman Janick’s vocals are drenched in enough watery reverb to overflow a host of early Voivod and Kreator albums.
And it’s not just the shouting from the bottom of the swimming pool vocal style that seems to be stuck in suddenly (inexplicably) resurgent Reagan years. Mixing slow motion Amebix trudge with underproduced early ’80s thrash, After the Bombs hearken back to metal’s first, earliest, awkward dates with that funny looking girl known as punk.
Penning longer ditties than your average two minute hardcore tune, After the Bombs give their songs the space to expand and meander, allowing the band to fully explore their riffs rather than breathlessly stampeding to the end of the song.
“Black Wind of Fear” is pure Def American-era Slayer midtempo chug, “Condemned” is a Reign in Blood thrash rush and “To the Void and Back” has the slow building creepy crawly atmosphere you expect from Seasons in the Abyss’ title cut. You get the idea.
This album combines not only the five tracks from Relentless Onslaught but also the four songs from Terminal Filth Stench Bastard EP (a truly inspired title, btw), which boasts slightly more robust production that gives the songs more verve, particularly the more pronounced bass attack.
The title Relentless Onslaught may not entirely pass the truth in advertising test because the production lacks the clarity or punch necessary to qualify as either relentless or an onslaught, but if you’re hunting for a shot of early ’80s crossover hardcore, After the Bombs will satisfy provided you keep your expectations moderate.
Posted by Andrew Childers at 4:38 PM