Oct. 28, 2008, was a fucking awesome day for grind with five high profile releases all dropping on the same Tuesday. So for the next few days I'm going to plow through the single best album dump of the year. 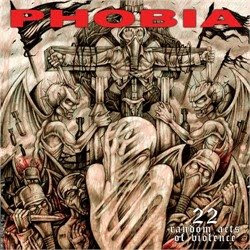 Phobia
22 Random Acts of Violence
Willowtip
Phobia and Scott Hull should have been like grindcore peanut butter and chocolate on 2006’s Cruel: two great tastes that taste great together. Instead of the grindcore fusion of permanent spinal injury inducing headbanging proportions, the two seemed to be working at cross purposes to each others’ strengths turning in a faceless, unremarkable half hour of music.
While Hull still gets a mixing and mastering nod, it’s former Phobic John Haddad (drummer on Means of Existence) who helms the board for the band this outing and while he scuffs up the production some, taking the gloss off the band, but it’s still just not quite enough for a sentimental old fuck like me (new bassist Leon del Muerte’s near-inaudible performance just may be in the running for the 2008 Jason Newsted Memorial Trophy for Irrelevance).
Don’t get me wrong, aside from the horrifically lame title (Pig Destroyer and His Hero is Gone have already done the number-of-songs-on-an-album-as-list-of-criminal-charges crap and it was stupid then, too), 22 Random Acts of Violence is a head-snapping affair from a veteran organization that knows its way around crafting a catchy blastbeat laden tune, such as Bolt Thrower-style opening chugger “Bring the War.” “Rise Up’s” gang chorus and dervish solo are punky goodness straight from the Disfear playbook and Office Space-sampling “Depression is a Killer” shows the band widening its sonic palette to include hints of churning melody that rush to a close before straying too far into retread Gothenbergisms.
I don’t begrudge them the backing of a solid label (poor bastards watched both Slap-a-Ham and Deathvomit go the way of the dodo, taking half their back catalogue with them) and the financial stability that comes with it, but for someone who grew up listening to Return to Desolation, this glossier, well heeled Phobia just doesn’t pack the same urgency and street level honesty that past albums have brought.
For all their lineup turmoil, the California collective, anchored by Steve Burda and Shane McLachlan, have never received the A-list kudos they deserve as America’s consistently finest grindcore practitioners for the better part of 15 years, but I’d rather see them get praised on their own merits than win acclaim while slowly evolving into just another grind band.
Posted by Andrew Childers at 9:25 PM

Gotta agree with that last paragraph. Haven't heard 22RAoV yet, but no release of theirs made me nearly as happy as Grind Your Fucking Head In, and I really don't see Phobia topping it anytime soon the way they're going right now.

once again you misrepresent your personal history with this music to your discredit.

just be honest for fucks sake!

jeez, you're like that shitty journalist on The Wire.

The bass is almost the loudest thing in the mix. Serious.

How about you pansy ass pathetic no-bodies go hang yourself from your parents basement as I assure you no one will miss you. Phobia is the pioneer or grind, and if you don't respect that, then go blast your blink-182 you f--king fa-gots. End your life.