Blast(beat) from the Past: Kataklysm 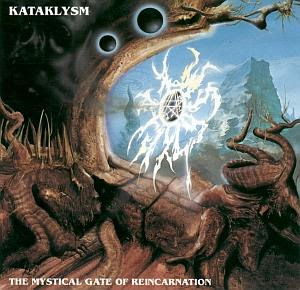 Kataklysm
The Mystical Gate of Reincarnation
Nuclear Blast
1993
Metal and the occult are a partnership as old Black Sabbath, but not many bands delved quite as deeply into the hidden lore of the universe as Kataklysm, whose original frontman Sylvain Houde constructed elaborate tales of the nether realms, establishing the ethos of the sole purveyors of Northern Hyperblast.
While the band has since devolved into generic into another generic death metal band with Houde’s departure and bassist Maurizio Iacono’s ascent to the microphone, The Mystical Gate of Reincarnation found Kataklysm at their most primitive musically, ripping out elaborately arranged song suites about the flimsy barriers between life and death.
Jean-Francois Dagenais summoned elder gods with the guitar solo on “Mystical Plane of Evil” – a lesson in discordance with notes seeming struck at random – while “Shrine of Life” conjures a tribal stomp Obituary guitar chug for most of its running time. Drummer Max Duhamel seems intent on establishing his legacy as a premier metal skinsman from the needle drop with the mechanically tight opening blasts and fills of “The Orb of Uncreation.”
While full length albums Sorcery (which has been reissued with Mystical Gate in tow) and Temple of Knowledge would find the band buffing out its rough production edges in favor of a more palatable sound, The Mystical Gate of Reincarnation remains an overblown classic of the era.
Unfortunately, without the power of Houde’s lyrical flights of fancy and the force of his voice and personality, later Kataklsym albums were marred by ill-advised musical adventuring (the unlistenable metalcore of Victims of this Fallen World) before settling on the death metal most people have come to associate with the band. But the later incarnation lacked the personality and charisma that made early Kataklysm something truly special.
Posted by Andrew Childers at 6:50 PM

Could never get into this. Seemed more metal than grind to me but hey, I'm easy.