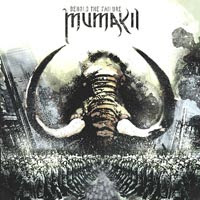 Mumakil
Behold the Failure
Relapse
Where 2007’s Customized Warfare was an unexpected cluster bomb of an album, Mumakil made the most of Relapse’s dime for their sophomore full length, turning in a far more visceral album than their previous efforts.
The Swiss misters’ oliphauntine stomp and snarl lace Behold the Failure with a feral, restless energy previously hinted but not quite achieved. The band’s mixture of Pig Destroyer nihilism (“Useless Fucks,” “Pisskeeper”) and Nasum attack has matured mightily in just two years and not just because the band actually named their songs this outing.
Mercifully, frontman Tom has dialed way down on the deathcore exhalation/pig squeal vocals, letting his charismatic bark lead the pachyderm-core assault. Guitarist Jeje’s songwriting has also vastly improved. Where Customized Warfare was an insidious if rather faceless effort, Behold the Failure has more texture and hooks despite being an unrelenting blastbeat frenzy. Despite Jeje and bassist Taverne’s past service in mathcore dervishes Knut, Mumakil will not be belaboring you about the upcoming sludge album they want to release in the future. This band goes to 11, and they never dial it back during all 35 minutes.
But it may be that breathless and relentless sense of acceleration that keeps the band from joining the ranks of the Relapse elite. Despite the piss and venom of their songs, Mumakil simply lack the infectiousness that laces the label’s other grindcore greats.
Grind fiends will cream their filthy jeans at Behold the Failure’s blasterpiece theater, but the album simply lacks the kind of musical hooks that will keep more casual consumers of the style riveted. But after several listens, you just know Mumakil have the potential for that kind of breakout album lurking just over the horizon.
Posted by Andrew Childers at 7:18 PM

absolut fantastic album...ok they are no nasum (in terms of songwriting/fresh ideas)
but they are simple BRUTAL...love it..

this stuff is dizzyingly good.