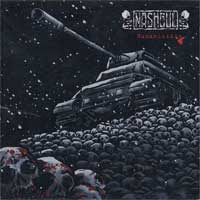 Nashgul
Humanicidio
Crimes Against Humanity
2006
Questionable names ripped off from ur-nerd texts from J.R.R. Tolkien may be most pronounced among bad black metal bands and even worse power metal offerings, but Mumakil weren’t the only grinders to fail a saving throw verses really bad literature. While Nashgul may spring from source material of questionable merit, these Spaniards are no slouch in the all important department and along with a few likeminded countrymen may be signaling a cultural shift on Euro-grind’s western front.
Beginning in the ’90s the locus of European grindcore was firmly entrenched in northern E.U. countries with a few old Warsaw Pact nations nipping at their heals. But somewhere in the last few years bands like Looking for an Answer, Overnoise, Denak (whose “Estado de Bienestar” gets covered here) and Nashgul suggest the center of gravity for European grind may be decamping for sunnier climes.
Debatable points of cultural import aside, Humanicidio, Nashgul’s collection of splits and singles through 2006 brings the fucking grind. Opener “CNP’s” varying punk and metal moods serve as the band’s business card, neatly summarizing everything these Spaniards can unleash. Before giving way to lumbering double kick, “Mad Max’s” psychedelic swirl could have been swiped from just about any CSSO album.
Slathering on some (admittedly monotonous) guttural vocals, telenovela-quality samples and assorted electric weirdness towards the end of the album tends to drag down the collection, but Nashgul more than redeem their flagging performance with the ripping, 1337 speak, gang chorused snarl of “Fr4ctur4 d3 C0still4.”
For grind this good, I’m willing to overlook the occasional misplaced Lord of the Rings reference, but don’t get me started on how much I hate The Matrix.
Posted by Andrew Childers at 6:40 PM

Labels: blastbeat from the past, crimes against humanity, grindcore, humanicidio, nashgul, spain