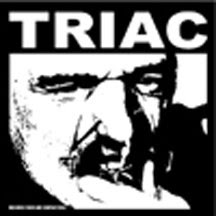 Triac
Blue Rooom
Reptilian
With all due respect to my good friend Apoctosis, Baltimore is a shit hole. This may be my D.C. bias showing, but seriously, if you wanted to give Maryland an enema, Bal’mer is where you stick it, hon. John Waters and a world class aquarium cannot make up for the fact that pretty much every bit of sleaze and violence you saw on The Wire was true. Maybe it’s the disease, corruption and choking ozone that permeates the ironically named Charm City that powers local residents like Misery Index and Quills.
Like their contemporaries, Triac specialize in raging kidney shots that split the difference between grind and hardcore like Capitalist Casualties and Excruciating Terror ripping up the greatest basement show ever.
But Triac aren’t content to beat you in a foot race on Blue Room. Just about every hardcore band has that one sludgy song. You know that long ass one that usually comes toward the end of the album and cools everything out. Triac lightly skip over that landmine by liberally sprinkling down tempo bruisers in between Jake Cregger’s (the pickled nun’s anus that powered the recent Drugs of Faith demo) blast beats for a far more varied mugging.
Like Wellington or Unearthly Trance’s crustier scabs, downshifted Triac seem to relish working you over with a tube sock full of useless Sacajawea coins. David Lynch-referencing (grok the distorted Dennis Hopper mug on the cover) almost-title-track “In the Blue Room” rides an oily tide of ringing Neurosis notes – those high, piercing wails that have served the San Franciscan treats so well over the years. “Isolation Tank” sways from creeping insanity to full psychotic break with the same emotional fragility that elevates Trap Them’s punch.
I can’t fathom why anyone would voluntarily live in Baltimore, but like Unsane and the Bowery, Triac manage to channel their environment crafting a soundtrack that speaks to their surroundings.

Baltimore Bums can pack a bite...something you can only learn from experience.