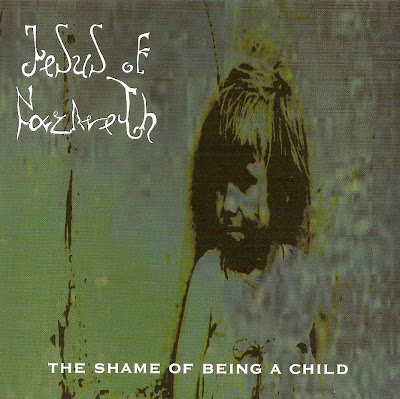 Jesus of Nazareth
The Shame of Being a Child
Dotsmark
Until a man is twenty-five, he still thinks, every so often, that under the right circumstances he could be the baddest motherfucker in the world. If I moved to a martial-arts monastery in China and studied real hard for ten years. If my family was wiped out by Columbian drug dealers and I swore myself to revenge. If I got a fatal disease, had one year to live, devoted it to wiping out street crime. If I just dropped out and devoted my life to being bad.
Hiro used to feel that way, too, but then he ran into Raven. In a way, this is liberating. He no longer has to worry about trying to be the baddest motherfucker in the world. The position is taken. The crowning touch, the one thing that really puts true world-class badmotherfuckerdom totally out of reach, of course, is the hydrogen bomb. If it wasn’t for the hydrogen bomb, a man could still aspire. Maybe find Raven’s Achilles’ heel. Sneak up, get a drop, slip a mickey, pull a fast one. But Raven’s nuclear umbrella kind of puts the world title out of reach.
Which is okay. Sometimes it’s all right just to be a little bad. To know your limitations. Make do with what you’ve got.
Neal Stephenson
Snow Crash
1992
Pages 271-272

The ongoing arms race that is the world of underground metal has driven musicians to employ bizarre tunings, shred in exotic time signatures and push drum machines well beyond manufacturers’ performance recommendations all in the vain hope of, however briefly, being crowned the baddest motherfucker on the planet.
Not that I’m saying Jesus of Nazareth (aka Jake Cregger of Triac) will be laying claim to that particular title any time soon, but the potent mix of drum machine powered grindcore and scathing anti-music white noise power electronics capably bends two divergent yet equally extreme offshoots of the metal family tree into a single hybrid, robust sapling.
Mr. Stephenson’s pithy thoughts on badassery aside, Jesus of Nazareth’s power electronics grind actually bears draws far more from another sci fi icon’s oeuvre. Miniaturized squalls of white lightening FX box implosions, relentless electro-thump drum machine grind over J. Randall tonsil scrapings share a kinship with J.G. Ballard’s meditations on the meat-meets-machinery realities of post-industrial society.
Stretching Agoraphobic Nosebleed interludes into whole songs would make The Shame of Being a Child an otherwise enjoyable experience, Cregger pulls a nifty little trick halfway through his second album.
The entire albums swings on the fulcrum between the techno-martial drumbeat of grindcore core of track 11 (songs lack titles) and song 12’s contemplative ambient reverie. Though the demarcation isn’t perfect (song 16 is yet another lightspeed horrorscape) the majority of The Shame of Being a Child’s latter half is composed of longer pieces that channel a far more uplifting emotional tenor. That pivot is like an electro-grind Irreversible. The Shame of Being a Child transitions from fulminating nightmare noise to something altogether more beatific and exalting, ending the album on a transcendent note that betrays the cold, emotionless façade that mars so much of grind and electronic music.

I love the metal, It is one of the best albums in the history, so I do not have it but I want to download it in a free way,can someone help me with a link?