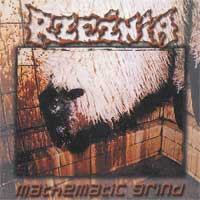 Rzeznia
Mathematic Grind
Selfmadegod
2003
Remember the first George Bush? A demon to the left at the time, Bush Pere (whose wife would be a shoe in for the Nobel Peace Prize if she had swallowed more often during their early marriage) seems like a downright likeable guy and canny commander in chief in retrospect. And at a time when a neutered Republican Party can’t seem to form a coherent policy position that doesn’t rely on further tax cuts on the plutocracy, it’s especially delicious to hear defunct Poles Rzeznia kick off Mathematic Grind with the classic “Read my lips” sample that sank the elder Bush’s political career.
But don’t worry about the false advertising of the album’s name. Unlike fellow countryment Antigama, Rzeznia will not be asking you to whip out your Texas Instruments T-84 graphing calculators during their half an hour workout of scabbed over Repulsion bass and pathological Carcass gurgles. There’s not too much here that a five year old couldn’t calculate on one hand; and that’s not a pejorative.
Unlike Antigama, whose Large Hadron Collider-core is intent on inverting the laws of physics, Rzeznia spice their traditional grind outbursts with stabs of left field weirdness. “Rzeznik” double-foots the brake to make way for a mid-song atonal a capella break while the band lets off some steam (gas?) with the belched vocals of “Tek-kno L.”
Padding out Mathematic Grind’s brief, to the point 11 song running time, Selfmadegod’s reissue includes a slew of live tracks and cutting room floor tidbits of varying sound quality that capture the essence of the band’s rough throated bass jud assault. Be warned, though, the vocals get obliterated in most of the extras’ murky mix.
Rzeznia could be ferocious when they set their mind to traditional grind (a cover of Brujeria’s “La Mignet” is a bass-led brick bat assault in a blind alley on the wrong side of Krakow) they were a ferocious outfit that more than justified their album’s severed limb artwork. But these clown princes with a conscience also slipped a comedic mickey into the typically dour Eastern European grind scene.
Posted by Andrew Childers at 7:10 PM