Blast(beat) from the Past: Inertia Kills 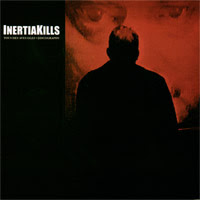 Inertia Kills
Tous Des Aveugles
Choking Hazard
2008
For a brief six months in 1995 Quebec’s Inertia Kills were not only one of the best From Enslavement to Obliteration cover bands working but they just may have been grindcore’s finest purveyors of hockey hair as well. Blastbeats and the ape drape, a combination you could only find in Canada or perhaps the seedier hockey rinks of Pennsylvania.
The band, featuring members of Immoral Squad other Quebec outfits too obscure to warrant a mention on Metal Archives, only had a pair of 7-inches and a pair of unreleased cover songs to mark their half year existence. The production is the audio equivalent of a leaking sewage pipe (that’s a compliment, btw). In fact, all of Tous Des Aveugles (All the Blind, according to my rusty college French) is an index fossil from an age before precision when grind was still slick with punk’s afterbirth.
The songs are all sloppy blastbeats cribbed from the Mick Harris playbook and have never been in the same timezone as a click track, fighting through distended intestinal tract grunts and forceful neutering yawps and an undifferentiated wash of guitar crunch. Songs like “Reforge Your Thoughts” kick off with four count drum beats, an unbroken strand of punk DNA that sneaks its way to the surface. The songs themselves are kamikaze races between the song’s end and impending musical collapse with a few obligatory mid tempo crushers (“Awake,” the title track) thrown in to relieve the blastbeats and clumsily edited samples (a classic from Ren and Stimpy on “Toy of Leisure,” Yoda’s wisdom kicking off “Ou”). The package is rounded out by covers of Crucifix and The Fact Remains That (Yeah, me neither). At just about 18 minutes, Tous Des Aveugles doesn’t overstay its welcome, providing a perfect snapshop to a transitional era in grind’s history when the punk was still strong and the ape drape was still a viable fashion choice.
Posted by Andrew Childers at 8:43 PM

i have both of inertiakills records and they are amazing. canada had a pretty kick ass scene for awhile there with seized, ire, saturation, human greed, dahmer and these guys. i'm not sure what happened to it but i'm glad i was around to buy all the records.