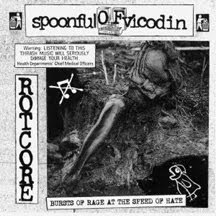 Spoonful of Vicodin
Rotcore
Bones Brigade
Everybody sing along now: Just a spoonful of vicodin helps the power-violence-inflected-with-thrash-shriek-and-grindcore-gurgle go down.
OK, so I’m no Julie Andrews, but for the authentic article spin Spoonful of Vicodin’s “Paved Paradise,” which deftly interweaves the Disney ditty with intermittent blasts of crusty noise. No mean sample, the two components trade off of each other, creating a wholly unique song from their disparate parts.
Terrible New York twosome Tim (drums) and Sarah (guitars) conjure the chaos that ensues after a suicide bomb goes off in a crowded market with the compilation Rotcore. The vocals careen between a manic 12 latte chatter and a starvation stomach rumble grunt and the production is just as punk as fuck.
A majority of Rotcore’s collected songs, 27 tunes in a whisker under 15 minutes, come with authentic “Smoke, Grind, and Sleep Production” courtesy of Danny Lilker. How you respond to semper lo-fidelis production will largely determine how you respond to Spoonful of Vicodin’s strain of rotcore. However, deliberately crude the music and production may be, the band carefully honed the exquisite sarcasm of their songs. “My Idea of Anarchy is Taking a Dump on Company Time,” “God Wins at Everything” and “Tapeworms in Punk, a Documentary” pretty much demand you pore over the lyric sheet.
Spoonful of Vicodin have the tunes and the sarcasm to make it all go down. No extra sugar needed.
Posted by Andrew Childers at 6:36 PM

I inclination not concur on it. I assume nice post. Especially the title-deed attracted me to be familiar with the sound story.