Blast(beat) from the Past: Tusk 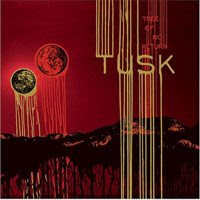 Tusk
Tree of No Return
Tortuga
2003
Between the too clever by half false start of Get Ready and the Pelican-lite disappointment of The Resistant Dreamer, Tusk glanced off grindcore perfection with Tree of No Return in 2003, the most disturbing travelogue since Ned Beatty, Burt Reynolds, Jon Voigt and Ronny Cox took an ill starred trip up the fictional Cahulawassee River back in 1972.
Featuring three quarters of Pelican (and actually preceding that band), Tusk’s self described “avant-grind” on the nightmarish Tree of No Return blends Pig Destroyer style ferocity with the experimentation of Converge and Neurosis. The Cliffs Notes version: a camper sets out into the wilderness (“Tree of No Return”), gets lost (“The Rising Terror, the Setting Sun”), stays lost (“Lost in the Woods”), slowly goes insane from hunger (“Starvation Dementia”) and gets mauled by brown bears (“Ursus Arctos – Walk the Valley”).
Beyond the Larry Herweg/Laurent Lebec/Trever de Brauw axis’ well documented instrumental prowess, Jody Minnoch’s increasingly deranged and expressive vocal delivery gives startling life to Tree of No Return’s unhinged narrative as he rasps and snarls like a grindcore Nick Blinko. His unwholesome whisper greases through “Tree of No Return,” exhuming childhood nightmares from your id. Minnoch’s vocal gyrations are bolstered by a sonic assault that errs on the side of unsettling. “The Rising Terror, the Setting Sun” is a demonic pixie dance that gets stumbled over and crushed by a drunken ogre while the incipient insanity of “Starvation Dementia’s” delirious acoustics are abraded by grinding madness. All of this psychic battery culminates in “Ursus Artcos,” a Hitchcockian masterwork that accounts for half the EP’s play time. It incrementally builds on electro-lit unease that crests but never breaks, slowly dissipating into a lingering dread.
Now if you’ll excuse me, I have a camping trip to cancel.
Posted by Andrew Childers at 6:25 PM

Labels: blastbeat from the past, grindcore, tortuga, tree of no return, tusk, united states

"Demonic pixie dance" sounds as interesting as stumble-drunk orgres. Gonna have to find this and give it a listen.

Hmm Well I was just searching on Google for some psychic readings and psychic articles and just came across your blog, generally I just only visit blogs and retrieve my required information but this time the useful information that you posted in this post compelled me to reply here and appreciate your good work. I just bookmarked your blog.

what excellent information , I think that it is so coool to read, I am a fan of these people because I think that they make a very professional work,thanks for share,good bye.