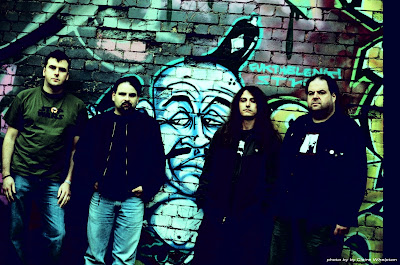 I am absolutely awful with song titles. Case in point, I was recently surprised by just how many I didn’t recognize on World Downfall. I shudder to think of how many times I’ve listened to that album in my life without “Whirlwind Struggle” piercing my consciousness.
As you can imagine, it’s a real handicap for somebody who loves to obsessively write, think and talk about music. My problem is only exacerbated by my love of grindcore, which places a premium on cramming a bazillion songs onto a 3-inch CD each gurgled out by a pitch-shifted tapir with impacted sinuses. But Karl Marx bless Napalm Death for giving inattentive shlubs like me a way out. Between Barney Greenway’s powerful but clear ogre roar and the undercurrent of underappreciated verse/chorus hardcore that has always girded their songwriting, I can generally make an educated guess as to what any given song’s title might be.
I’ve come to praise pop-influenced songwriting not to bury it.
Punk has always been about stripping away the dross that weighs down pop music, and somewhere during the evolution from hardcore to grind niceties like catchy verses and choruses were deemed expendable. But a funny thing happened when the band that laid grindcore’s cornerstone started wandering off into death metal pastures, discernable versus started oozing back into their songwriting and have remained a fixture of the band’s post-Earache renaissance.
Oh sure, even I’ve mocked Napalm Death for an over reliance on clichés (Time Waits for No Slave, mercifully platitude free!), but even a shopworn bromide like “When All is Said and Done” could power a spiraling Jacob’s ladder of a tune on Smear Campaign. Ditto millennial return to form Enemy of the Music Business and “Necessary Evil.” Even during the band’s creative nadir, an album like Words from the Exit Wound, for which I harbor an unabashed fondness, or Inside the Torn Apart, which I loathe, would be elevated by the headbanging, scream-along ear candy of “Next of Kin to Chaos” or “Breed to Breathe,” which were motored by an elusive mixture of catchy riffing and a gripping chorus.
The most stunning thing about a “Greed Killing” or “Instruments of Persuasion” is that they exist at all. Napalm Death, albeit with different constituents, embodied and championed the notion of shearing a song down to its – occasionally absurd – essentials. But having popped a creative Viagra at the fin de the most recent ciecle, Napalm Death are challenging the strictures they laid down. Napalm Death now prove that grindcore, often mocked at pointless thrashing by the more “musical” offshoots of the punk and metal trees, can be just as involved and downright enjoyable as the most tightly focus grouped pop tune without ever compromising on the extremity.
Posted by Andrew Childers at 6:38 PM

I can never remember song titles either....if you tell me the song title i won't know what the hell your talking about, but if you say track 12 i'm totally on board.

Your blog is killer!! Up the good work!

I feel your pain; me and song titles do not jive. I can't recall the number of times I have said "check out track 2 on World Extermination." At least Mumakil made my life easier with the numerical titles on Customized Warfare.

Points excellently made.
It's Friday and my brain is a bucket of mush and the only thing that can drive me to the end of the work day is several hours of Napalm Death. Hail to the catchy verses and choruses. I can't wander around in a sea of esoteric black metal all the time, it puts me to sleep.
This distillation of pop-sensibilities are what make the current Black Anvil album pure bliss for me.

But I must mention that I feel the exact opposite about WftEW and ItTA. :)