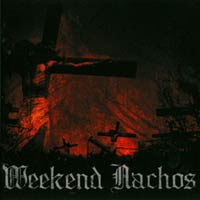 Weekend Nachos
Punish and Destroy/Torture
RSR
With a new album due to drop on Relapse, I belatedly turn my attention to Punish and Destroy/Torture, a collection of Weekend Nachos’ early stabs of second wave power violence. It’s the sonic equivalent of wiping out on your skateboard into a gravel pit.
Burlier and more refined than Spoonful of Vicodin, Weekend Nachos work the same territory as their fellow Empire Staters, cobbled together from shrapnel labeled Man is the Bastard and Apartment 213.
While the strained hardcore vocals trend a tad too monotonous, powers through that sole drawback with violence. Paired together, the EPs (Torture is the heavier of the two) practically present a survey course of every subgenre ever suffixed by –violence or –core. “Punish and Destroy” spends four minutes crawling through Winter’s back catalogue and “Intro” devolves from meticulously plotted electronic blorp to ominously ringing guitar chimes from transitional era Neurosis. But Weekend Nachos also draw in the Dismember-ed death opening of “Dimension X,” rocked cock swing of “American Hardcore” or slow noise rock dissolution of closer “Sludge.” Every couple of songs finds the Nachos appropriating another shard of the fragmented punk and metal scene, holding them up to the light and marveling at the refractions. While that may not initially sound cohesive, Weekend Nachos manage to make all of it their own. From one more interesting This Comp Kills Fascists alum, I’m now officially curious to see what the band can do on Relapse’s dime.
Posted by Andrew Childers at 8:19 PM

I downloaded an advanced copy and I was surprised. There's a lot of crusty, sludge on Unforgivable. So much of it feels mid paced and forced. This is admittedly only after like two spins.

orly? cuz i liked a lot of their mid-paced stuff. very mitb. is the newer stuff in that vein?

also, dude, i posted this like 10 minutes ago. it's friday night. i know you've got better things to do than read my stuff. ha.

I should go listen to some more Man Is the Bastard. My knowledge of power violence is limited and strained. Is having lots of blasting/wailing/screams followed by some sludge a common thing? I know xBrainiax does it, and those guys fucking own my face.
Having no girlfriend now gives me lots of extra free time. And reading about sweet shit on the internet is a good way to spend all this free new time.

i'll never have to do a "how do you define power violence" post cuz you just nailed it.

xbrainiax ruled my face too. expect more on them in a week or two.

I don't like what Relapse does to a band that is not already established but I'm being a good boy and reserving judgment.

This Comp Kills Fascists is turning out to be a blessing. So many quality bands have put out albums since that release.

relapse has definitely been getting rather "major label-ish" the last four or five years, but this year's crop of grind has been pretty solid. i'll be interested to see what they do with a straight up power violence band like nachos. i can't think of another purely pv band on their roster.

Alright, this came in the mail, and I can say with a smile: I am satisfied.